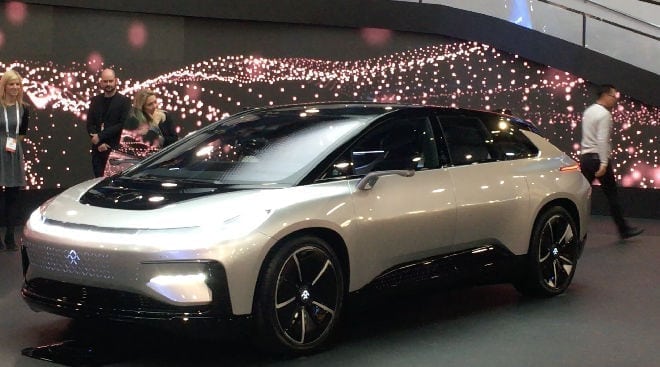 Faraday Future’s long-awaited electric car is finally here. This comes after years of speculation, rumors, and hints of what the future holds for the electric car industry. As an attempt to become Tesla’s most significant rival, Faraday Future’s FF91 electric car is claimed to be a “new species” of vehicle. It allows for various automatic functions, incredible speed and durability, mind-blowing technological innovations, and high reliability.

The Consumer Technology Show, CES in Las Vegas is a place for technology companies to show off what they’ve done and reveal their newest products and/or services. Faraday Future’s reveal of the FF91 really stole the whole 4-day convention.

“We don’t even consider ourselves to be just a car company building a better way to get made to be. We’re a technology company reformatting the future of mobility,” states Nick Sampson, the SVP of Engineering at Faraday Future and the first keynote speaker at CES 2017. “We’re a global EV company with the energy and the spirit of a Silicon Valley starter and a radical vision for a new kind of ecosystem.”

The goal of the FF91 is to combine everything that a car can do and everything that you didn’t think a car could do into one single, awesome car. The FF91 is basically a crossover of an SUV, a minivan, and a sedan along with luxurious features and the power of a sports car. It combines the features of an electric car with the power of computers, the internet, artificial intelligence, and various forms of communication.

The all-new electric vehicle features a dual-motor rear-end drive, rear wheel steering, and an optional front-mounted motor with a horsepower of 1050. The 130.0kWh battery can make the FF91 run from 0 to 60 in a claimed 2.39 seconds. This is faster than its rival, the Tesla Model S. Faraday Future actually proved this by showing the audience a small race between the two cars. They also showed races between other cars such as the Bentley Bentayga and the Ferrari 488 GTB.

The battery, made in partnership with LG Chem, allows the FF91 to run for around 380 miles on a single charge, around 60 more miles than the most potent Tesla Model S. Perhaps with what the FF91 will be most compared with is the Tesla Model X P100D which can run at around 289 miles per charge. They’ve been able to accomplish this by creating “the world’s highest energy density battery cell” and designed 130 of these into a compact pack that is the most potent in the entire electric vehicle industry. Faraday Future claims to want drivers to “forget range anxiety”.

Probably one of the most controversial things about the FF91 would be the fact that it contains no rearview or side-view mirrors. Instead, cameras are located around the car and show live video feedback to the driver from the touchscreen control center. This allows for a blind-spot-free rearview. This control center is a giant tablet-like touchscreen device. Faraday Future has embraced the power computers and has integrated the control of almost all of the FF91’s features into this control center. Controls such as window movement and seat adjustment are integrated into the device. There are almost no physical buttons making the FF91 feel sort of like a smartphone-controlled toy car (which is awesome).

If that doesn’t sound cool enough, the car parks itself! The driverless valet feature allows the driver to step out of the car and have the FF91 proceed to park itself. The driver must command the car to do this through the FF Control app on their smartphone. After this happens, the FF91 will use a variety of sensors and cameras to determine traffic, barriers, routes, pedestrians, other cars around itself, and, eventually, find a parking spot.

The parking spots are available to be found only in parking lots that have been scanned and tested by Faraday Future. A radar placed in the center of the front trunk is the central sensing unit that allows for this feature to work. Once the car has parked itself, the FF91 will shut off and put itself in park mode. The indicating light changes color to indicate that the car is in autonomous mode. The central radar in front of the car will turn off and the camera itself will hide back into the trunk.

The design of the car has to be the most astonishing feature about this car, other than the amazing technological features it holds inside. The car is designed to have the proper aerodynamics with a 0.25 drag coefficient. The top layer of the car, dubbed the experience layer, is the part of the car that holds most of the what the driver and passengers will interact with. This part of the car features a transparent, panoramic roof with much of the car’s “digital ecosystem”. The “Eclipse mode” allows the transparent roof to dim and darken, providing not only shade for passengers but also privacy, especially from drones (or birds, I guess).

The middle layer, or the “silver layer”, is the part of the FF91 that is the heart of its aerodynamics. It sports the signature design features of the car. This layer contains a UFO-like design which has expanding head and tail lights all over the back and front of the car. Marques Brownlee describes this as “sort of like a stretched out Model X.” The bottom layer contains all of the things that make the car run such as the battery, motors, and tires. This layer also sports various arrays of LEDs across the entire car that indicate to other drivers what the car is doing. In front of the car at the bottom is a LED circle which is the wireless charger that connects to the charging pad on the floor.

With the success of Tesla Motors in the auto industry, it’s nice to finally see the industry taking this turn. A more electric, futuristic, clean, and super awesome future. Faraday Future has not had the smoothest of starts for such a company. But it has really shown the world what it is capable of. It has challenged perhaps one of the most loved automakers to an innovation duel. The FF91 is only the beginning for Faraday Future. It has a lot of features that scream Tesla but that’s only because the company itself has Tesla in its DNA. It has two former Tesla employees.

They only showed a couple of beta models at CES so it is likely that some of the features announced at CES 2017 may not actually appear on the production model. Or who knows, maybe Faraday Future will give us more than what they showed us now. The only thing left to do now is wait. All we know for sure is that the Future is now, and it looks amazing. See for yourself.