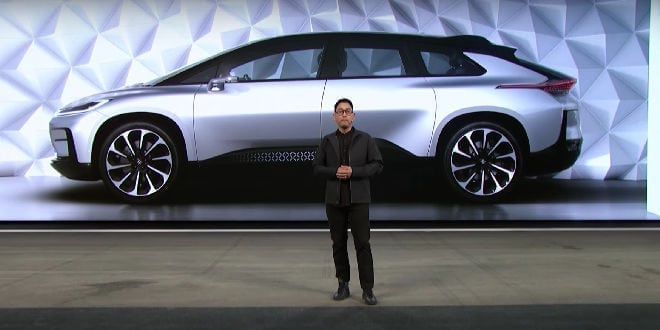 After spending four days at CES, a few things stick with you.  When you first come home your head is swimming with all you have seen. Some products rise up in your consciousness and stand out, over, and above the hundreds of products and tech you’ve seen. The Faraday Future ff91 is one such product. I missed the official CES reveal but Faraday sent me an email containing the video of the highlights of the reveal and a link to their press kit. This got me thinking about this company all over again. The reveal was reminiscent of an Apple event. Complete with all the anticipation of witnessing a really well designed, tangible, bleeding edge technology product for the first time.

How Real The Reveal?

There is a lot going on behind the scenes at Faraday Future which has been considered to be a secretive company.  Faraday is a global company with offices in Silicon Valley, Los Angeles, Beijing and Duesseldorf with over 1400 employees the company reports. There has been some suspicion that Faraday has run out of money. The construction of their huge manufacturing facility in North Las Vegas has still not begun.

The company has been funded almost entirely by billionaire Jia Yueting the head of LeTV, a Chinese media firm. The factory would bring 4500 new jobs to the Las Vegas area. Forbes reported that a letter was sent to Nevada legislators from Jia, reassuring lawmakers that he was not the only founder of the company.

Jia is quoted as saying in the letter, “While I am personally backing FF, there is also a diverse funding strategy to help us fully realize our mission and vision. We plan to revolutionize the automobile industry by creating an integrated, intelligent mobility system that protects the earth and improves the living environment of mankind, so that everyone can breathe clean air and enjoy a seamlessly connected lifestyle.” Noble thoughts indeed.

What I saw at CES appeared to be real, tangible, innovative and exciting and not an illusion.  I wish Faraday all the luck in the world. I hope their endeavors lead to a car that is eventually obtainable by the masses and not just the mega rich. Why, because that is what’s needed to transform the global mobility landscape and get us away from fossil fuel and closer to the greater goal of a cleaner planet.

Hey Apple, You In There?

I’m sure I’m not the first to have this thought or to say this out loud, but why hasn’t Apple approached Faraday? Or have they? Who knows? Apple’s pursuit of an “Apple Car” has made the list of best kept secrets along with details about Faraday. But what a partnership this would be.  Everybody wins. Faraday gets the financing to see it’s dream car go into production. Apple gets the car it has been trying to develop (whether admitted or not). Apple has the cash, both companies share a passion for design and cutting edge technology and share a fan base that would love to see both companies succeed in this space.

The Rest Of Us

I wish Faraday luck and hope their dream can be realized and made available to all of us who like to see the underdog win. I also wish Apple luck in developing the “next big thing”.  It’s time for a new groundbreaking product. Perhaps a partnership instead of an acquisition is the way to go with a task as monumental as designing, building, testing and manufacturing a new cutting edge vehicle for the masses.  Just my thoughts.  Share your thoughts in the comments below.