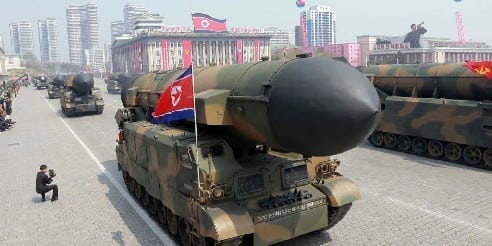 Kim Jong Un, the dictator of the “Hermit Kingdom” was riding high on Saturday. The celebration honoring the 105th birthday of his grandfather Kim Il Sung, the founder of the North Korean government was in full swing. This celebration served as an opportunity to put on a show of force. North Korea’s armed forces and equipment were on parade including some rather large missiles. The supreme leader has been determined to create tension in the region with threats of war. With particularly disturbing threats directed at the US. This is punctuated by the Supreme Leader’s insistence on continued nuclear tests and missile launches, in direct defiance of UN resolutions designed to keep the Korean peninsula free of nuclear weapons. The most recent test launch was a supreme failure, exploding shortly after launch. There is some interesting speculation as to why it failed.

Sir Malcolm Rifkind, a former Foreign Secretary for the United Kingdom, told the BBC, “there is a very strong belief that the US — through cyber methods — has been successful on several occasions in interrupting these sorts of tests and making them fail.”

A Break In The Tension

The fact that a US Navy battle group was in the area and that the US Pacific Command was quick to report the missile exploded over the port city of Sinpo “almost immediately”, may lend some credence to the claim that the US was responsible for hacking it into oblivion. We will probably never know for sure why this test failed. But I for one will rest better, at least for the time being. Knowing that our armed forces were possibly responsible for soiling the Supreme Leader’s punch bowl has temporarily relieved the tension. The facts are that North Korea has had many successful nuclear and missile tests and they seem hell bent on being a threat to the region is reason enough for the US and its allies to keep a close watch on the Hermit Kingdom’s mischief.