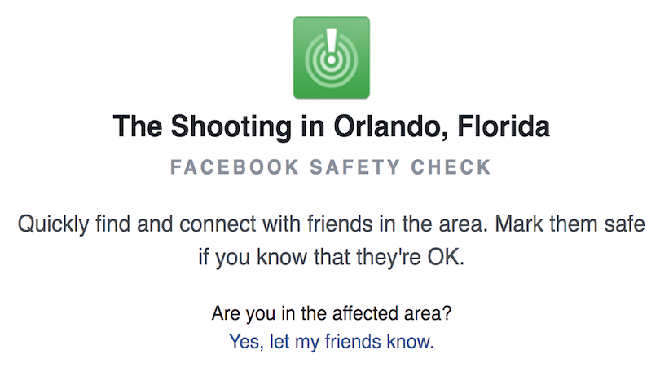 Facebook turned on its “Safety Check” feature following the devastating mass shooting in Orlando, this was the first time the tool was ever used on the US soil.

The feature, which allows users to mark themselves as safe in an emergency situation, was activated on Sunday as more than half of the victims’ families were still trying to pinpoint their loved ones’ whereabouts.

The feature was developed by Facebook engineers, inspired by people’s use of social media to connect with friends and family in the wake of the 2011 Tohoku earthquake and tsunami. Originally named the Disaster Message Board, it was renamed to “Safety Check” prior to release. It was introduced on October 15, 2014. Its first major deployment was on Saturday, April 25, 2015 after the 2015 Nepal earthquake.

The first time Facebook activated the feature for a violent attack (or any non-natural disaster) was the Paris shooting in 2015. Since then this platform has gained traction and has been used globally in times of crisis to connect with loved ones.

“Following the community-generated “Safety Check” activation this morning in Orlando, we have now activated Facebook-initiated “Safety Check” for a mass shooting at a nightclub there. We hope the people in the area find the tool a helpful way to let their friends and family know they are okay,” a spokeswoman for the social networking company said on Sunday.

Between January and May this year, Facebook activated “Safety Check” 17 times compared to 11 instances in the previous two years. The recent disasters for which the tool was activated included earthquakes in Ecuador, a wildfire in Alberta, Canada, a cyclone in Bangladesh and flooding and landslides in Sri Lanka.

This new feature is turning to be instrumental in times of crisis and disaster; we hope Facebook keeps on supporting it.