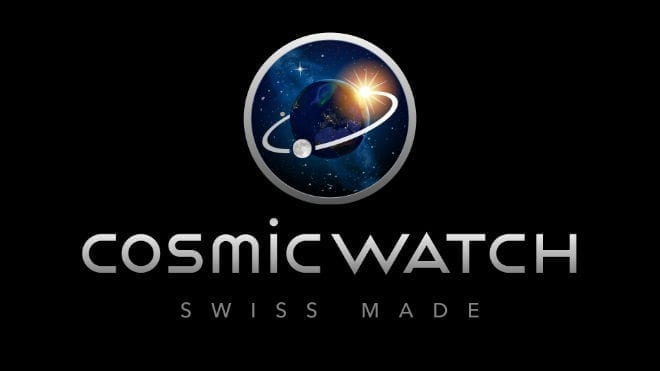 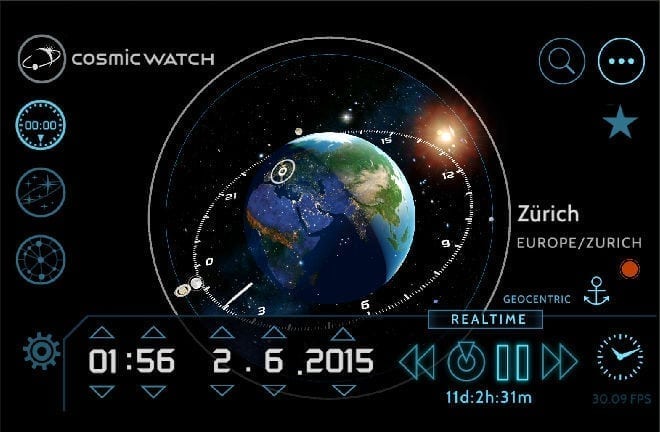 I came across the Cosmic Watch which is an app from Celestial Dynamics AG. Cosmic Watch is Swiss made in the tradition of superior craftsmanship of Swiss timepieces. I am both impressed and fascinated with the approach it takes displaying space and time relationships. It does this from a real time and astronomical point of view. The Cosmic Watch is a beautiful app. But more than that, when using it I felt like I was using a sophisticated scientific instrument. It really connects the user with the wonder, dimension, motion and balance of the universe. 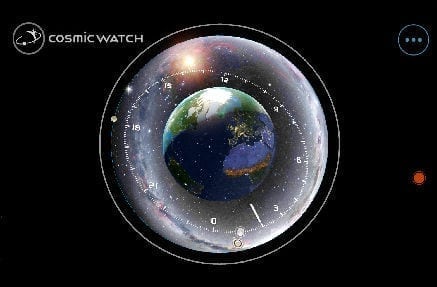 When we observe the heavens we see it from the earth outward.  The Cosmic Watch gives you the perspective from the heavens looking at the earth.  When you think about it this presentation makes a lot more sense. It combines celestial movement with time which are really inseparable but often presented as such in other tools. The Cosmic Watch can be used as an observation tool to locate your location’s relationship to heavenly bodies.

“The COSMIC WATCH displays time in relation to the sun and the cycles of the planet.” 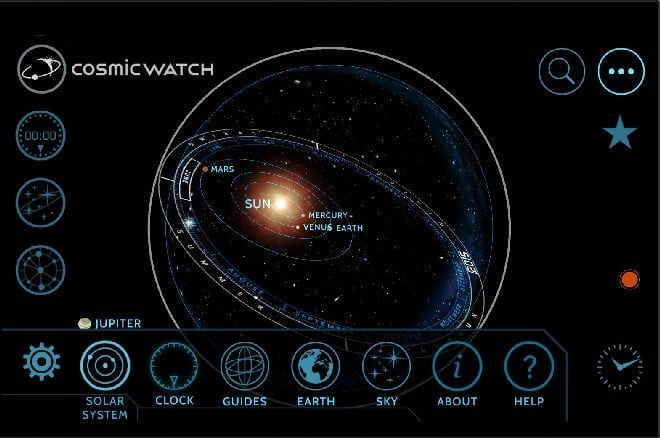 At first glance, I was a bit overwhelmed with the amount of data Cosmic Watch presents you with. But this quickly fades away as you explore the interface. It feels more like a scientific instrument than a piece of software, which I personally feel is a significant accomplishment.

“When focused on your location, the sun crosses the horizon and the shadow comes and goes. We see when day and night are just beginning.”

The Celestial Dynamics website has a series of three video tutorials to bring you up to speed quickly.

The first titled “Orientation”, will show you how to align the Cosmic Watch to cardinal points so you will be able to find and identify celestial objects and synchronize the Cosmic Watch with the sky.

Sky motion is the second tutorial that will teach you the basic apparent daily motion of the sky from the northern and the southern hemispheres.

Here you will learn how to set up your personal world clock. You can search your favorite locations and save them. It was never so fun to know the time in the world! 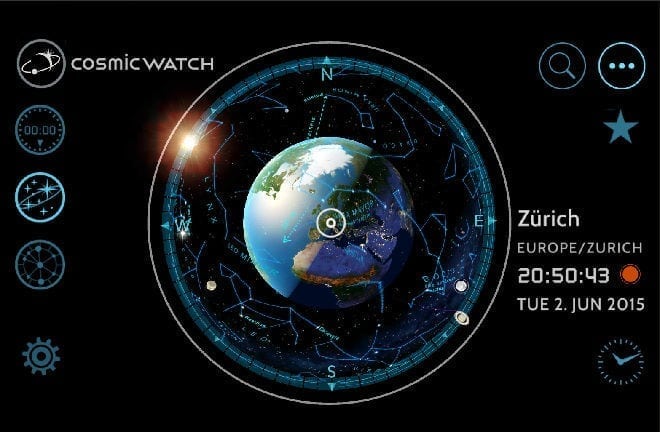 In addition to the video tutorials, there are more in-depth written tutorials and guides covering topics like:

Once you review this material you will have a thorough understanding of this magnificent instrument. This will open the door to a better understanding of the relationship between time and space had how it relates to the world around us.

“The COSMIC WATCH melts the concepts of a clock, a calendar, a globe, a solar system simulator and a celestial sphere.”

I highly recommend this app and send a big high-five to the team at Celestial Dynamics AG. for this magnificent piece of work. Cosmic Watch is Available for iOS and Android, phone or tablet. I’ve heard that a stand-alone desktop version is in the works.  I’d love to see a macOS version sometime. Check out the Cosmic Watch. http://cosmic-watch.com/