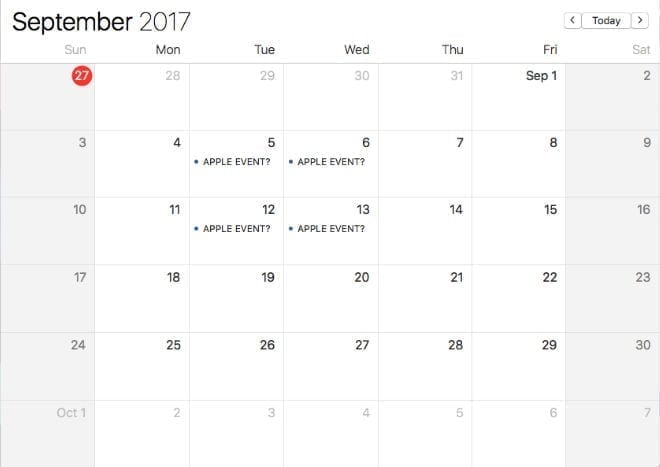 Bloomberg reported that Apple plans to announce a new version of the Apple TV at the September Event. The new Apple TV will support HDR with improved color and 4K video at 2X the resolution of 1080P. Apple’s new set top box will also feature live content like news, weather, and sports. This is coming on the heels of Apple announcing that it will be investing $1 billion on original content. This will be in addition to Apple productions of “Planet of the Apps” and “Carpool Karaoke”.

Back in June, Apple CEO Tim Cook said, “you’ll be hearing a lot more about tvOS later this year.”

This could mean that more information on the Apple TV operating system will be shared at the September event.

Apple Watch (Series 3) is also expected to be announced at the September event. This is the cellular device that will no longer require an iPhone to be nearby to make and receive phone calls or stream music. Improved performance and battery life are also expected to part of the announcement.

There has been speculation whether the new Apple Watch will support 3G or LTE.  KGI has been reported as saying it will be an LTE device which will limit it to markets where LTE is available.  A pain point of the Apple Watch has been a relativity short battery life. This will be a point of interest for Apple Watch series 3 since cellular and streaming music will consume more battery.  I’m confident Apple would not make the move to cellular for the Apple Watch without a solution to extending battery life for the device.

With the holiday season on the horizon, it makes sense that Apple will be focusing on its consumer products like the Apple TV, Apple Watch, Home Pod, iPods and of course the latest iPhones.  We will have to wait for the Event to put all the speculation and rumors to rest.