This article was originally published at Mintdice.com on July 18, 2018. It is being republished here with the publisher’s permission through syndication.

EOS has been one of the most talked about cryptocurrencies on the market but there are many differing opinions. It has been hailed as the promising future of cryptocurrency, and it has been criticized as a complete scam. Regardless, it remains the fifth largest digital token by the overall market cap.

Created by one of many blockchain startups, Block.one, EOS raised $4 billion over a year-long initial coin offering (ICO) to develop its open-source software — before the system was even built. Now, after a slow process to develop its blockchain platform, EOS finally launched as of June 14th, catalyzing a flurry of buzz over the web. Having presented itself as a solution to many of the flaws with blockchain technology thus far, the world is watching to see whether EOS can take over Ethereum or Ripple, among other leaders in the cryptocurrency space. 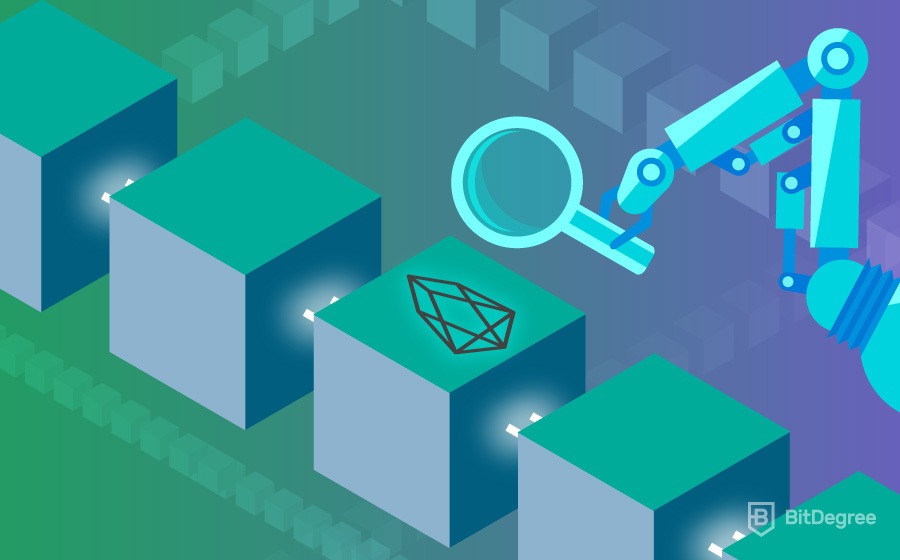 EOS is a blockchain platform that is designed for the development of decentralized applications (dapps). It makes dapp development easy by offering a comprehensive operating system with services such as server hosting, cloud storage, and user authentication — all without a centralized server. Instead, EOS strives to use a distributed system using blockchain tech.

Designed to compile all the best features of today’s existing smart contract technologies, such as Ethereum’s computing support and Bitcoin’s security, the EOS vision is to create an extremely fast and secure blockchain dapp platform that can scale to thousands of transactions per second, all while being easy-to-use for the average user.

The Cloud: EOS provides server hosting, cloud storage, and download bandwidth to developers as they build and deploy applications and web interfaces.

Scale: EOS can scale to one million messages or transactions per second right away on one machine. The scaling possibilities can be endless in parallel between multiple machines.

Free for Users: When an application is built on an app platform, micropayments are not required to send messages and perform tasks on the blockchain by end users. App developers determine how the typically low transactions fees will be paid.

Features: The community can fix bugs, upgrade, and downgrade in the system democratically and securely. This works by having block producers vote to confirm certain transactions, whether applications are running properly, and on modifications to the source code of the system as well as specific applications.

Fast Performance: Messages and transactions can be sent and responded to within single blocks and between blocks. This brings the theoretical bottom limit to the response time down to merely message transmission time over the net.

EOS COULD LEAD THE INDUSTRY

With its ability to perform transactions at the impressive rate of 100,000 per second, many are expecting EOS to be capable of scaling in unprecedented growth rates in blockchain history.

EOS was also ranked as the number one blockchain by the China Electronic Information Industry Development Blockchain Research Institute (CCID) — a resource that works to generate an independent rating system for the blockchains. CCID is the scientific research institute for China’s Ministry of Industry and Information Technology (MIIT). Since its founding in 1995, it has been responsible for technology research and development, policy-making, and software testing for a wide range of sectors. The CCID’s assessment ranked the otherwise leading systems Ethereum and NEO in second and third place. Surprisingly, Bitcoin placed 17th, even though by market capitalization it stands as the largest cryptocurrency. In the CCID assessment categories, EOS outranked its competition in fundamental technology.

CCID’s top rank for EOS is seen as somewhat controversial, considering how its incredibly recent launch —occurring less than a month ago— was paired with technical bugs and issues with transactions. Still, according to the CCID, EOS is viewed as a typical representative of Blockchain 3.0. due to its potential to support commercial distributed applications.

Nonetheless, companies are already beginning to leverage the EOS platform. Bitfinex, the cryptocurrency exchange platform, made an announcement months ago about its plans to establish EOSfinex: a decentralized exchange that would be based on the EOS blockchain.

NOT SO DECENTRALIZED, AFTERALL?

The cryptocurrency market values decentralization as it avoids scenarios in which a single majority takes control and can corrupt an entire system. With EOS, however, we are seeing signs of centralization.

When it comes to EOS, block producers are voted in by token holders rather than competing in a global open market. When you stake your tokens, you can select up to 30 Block Producers to act as nodes. The 21 Block Producers with the most votes can validate blocks. Owning more tokens gives more voting power, which is meant to expedite transaction processing, but this feature has brought on criticism about the potential of vote-buying and consolidating power over the network. In fact, approximately 75 percent of the tokens are owned by the top 100 holders. Additionally, EOS uses a Delegated Proof of Stake consensus algorithm that consists of only 21 nodes, which create and validate blocks. Compared to Ethereum’s over 10,000 networks, this demonstrates centralization in EOS.

Many are questioning the way this all works, and it also presents a problem of apathy for smaller holders who lack voting power. It is not unlikely that many of them would disregard voting altogether, which gives the wealthy even more control. This had already shown to be a problem as the platform has thus far been unable to achieve the 15% of votes that are necessary to validate the chain. Some have questioned if there are other solutions to scalability that do not compromise decentralization–at least not to the extent that it is with EOS.

While EOS is not a fully decentralized blockchain as other cryptocurrencies, it may be true that it has enough decentralization to be effective. With its 21 nodes, EOS is still substantially more decentralized than the one-party systems that have been in place. Moreover, voters can vote their representation, and they can vote out Block Producers that are not acting in favor of the community. Under the EOS constitution, all owners who hold at least 1% equity must be disclosed. If the network participants determine that there is too much centralization, they can elect new Block Producers.

The speed of transactions and projections for unprecedented growth that EOS offers are appealing, but the centralization that comes with all of this has rallied criticism. With decentralization being a pivotal advantage to blockchain in the first place, it is unclear if users will jump aboard this new model. Could it be worth compromising some level of decentralization in the interest of speed, efficiency, and scalability? And might this help achieve mainstream commercial success down the road?

The launch of EOS has come with challenges, but EOS could navigate its way through these growing pains to endless possibilities.

More on this topic: Should Your Company Become a Blockchain Business?     •     IBM TO USE STR COIN ON STELLAR BLOCKCHAIN