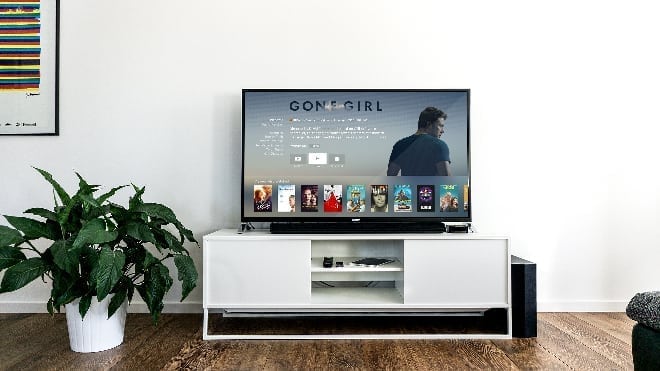 Our friend and fellow blogger Andy Marken has focused on entertainment lately.  Namely streaming content for everyone and on any device.  Here is some of what we learned from Andy.

A few weeks ago, Andy was in San Francisco and ran into a lady friend of his. She was enjoying some YouTube content while Andy was catching up on a series on Amazon Prime, “Please Tell Me I’m Adopted.” A hilarious episodic comedy Andy tells me.

Psychologists from all over the world refer to our mobile screens as a legal narcotic.  You can’t go out these days without seeing people glued to their screens watching movies, TV shows, sports and more over their high-speed connections.  Streaming has quickly become the preferred method for consuming content.

This is a challenge for those who distribute this streaming content since they are all competing for viewers.  Whoever captures the most viewers reaps the most advertising revenue from companies that advertise their goods and services.

Andy tells us, “Two years ago, Nielsen surveyed people in 61 countries and two-thirds said they streamed video. To keep up with the video hunger, streaming TV programs have more than doubled and live video streams are being introduced in crazy numbers for news, concerts and sporting events.”

“Shifting – While viewing of traditional TV with prearranged schedules has been slipping and OTT has been increasing, the demise of scheduled TV will be a long way off.  Instead, people will just view more content in different ways, on more devices.”

Millennials have completely severed the cable and ignore traditional cable and satellite options.

It still looks like POT (plain old TV) but is delivered over the Internet instead of the cable.  Over-the-top content (OTT), is media transmitted over the Internet without a cable or direct-broadcast satellite television systems is quickly becoming the preferred method of consuming content. 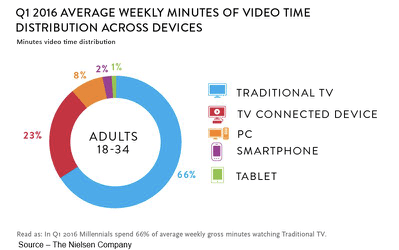 “Time Extensions – Whether it’s over the TV, device or whatever, people are watching content their way and always seem to be looking for more (quantity and variety).”

This still boils down to a bunch of channels or streaming content that you can watch anytime, anywhere, on any device for a monthly fee.

As long as the bandwidth is available the only concern is how much all these various offerings will cost you.

The SMPTE (Society of Motion Picture & Television Engineers) and other standards groups have a real investment in this game. They need to ensure buffer-less distribution of streaming content into your living room or mobile device over broadband, Wi-Fi, mobile net and whatever else comes our way tomorrow. The hardware providers want you to buy their product. The software people want to move their code; and the content makers want you to stream, rent, or view their productions.

“Two areas getting the most attention are ATSC (Advanced Television Systems Committee) 3.0 and 5G.”

Hardware, software, and broadband are all critical to streaming content that is 4K HDR (high dynamic range).  This is especially true as more and more of the virtual world gets to us on screens with Ultra High Definition resolutions at 3840 pixels × 2160 lines (8.3 megapixels) and 120fps (frames per second). This means really sharp, crisp, and beautiful content, on any screen.

“By the committee’s definition, ATSC 3.0 is the next-generation broadcast standard using advanced transmission and video/audio coding techniques to keep you hooked on content.

Since ATSC 3.0 will require a major investment in new systems, the standards groups have set up major goals for performance, functionality and efficiency so providers will be compelled to invest in new non-backward-compatible systems.” 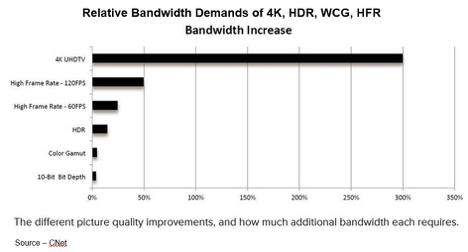 “Standard Delivery – To provide viewers with the best content possible, members of SMPTE have developed standards for 4K HDR content as well as WCG (wide color gamut) and HFR (high frame rate).   Content looks great but it does require “a little” added bandwidth.”

A new standard is necessary because…

But as usual, the devil is in the details.

People watch more content streamed to their TV, so industry players want to ensure they capture the largest number of eyeballs possible.

Since our smartphones are always within arm’s reach, content providers want to ensure we stay connected to great video whenever we want it. 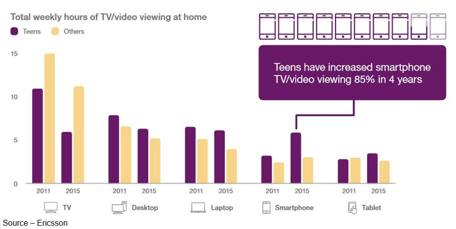 “Shift Happens – While boomers and boomers plus may be comfortable with POT (plain old TV), millennials will shift, cable shave or cable cut.  But it is the up-and-coming generation that content owners and advertisers have their eyes on winning over and they pay close attention as to how they view content.  Tomorrow, they will be the major content consumers.”

Not too long ago the mobile industry was excited about 4G content delivery. Back then they were talking about beefing things up with LTE (Long Term Evolution). Simply meaning 4G LTE is faster and lets you consume more streamed content on your device.

Even though 4G LTE is not universally available at this time, that didn’t stop exhibitors at the WMC (World Mobile Congress) from telling us how awesome 5G is going to be, and sooner than you might think.

Even if it takes a while longer to deliver 5G streaming, this will not slow marketing types from telling you how great their new device, infrastructure or service will be when it finally arrives. 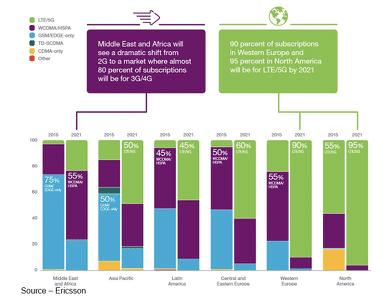 “Really Fast Soon – While wireless service providers talk about 5G bandwidth and their delivery of LTE; most of the time, you’re lucky if you get 4G speeds for your video downloads.  But soon…. “

The industry is increasing fixed broadband bandwidth, but it’s mobile that needs lower latency and an increase in speed to meet the content industry’s and the consumers’ needs for mobile consumption.

“Cisco projects that mobile IP traffic will increase 3X faster than fixed traffic and will represent 16 percent of all IP traffic by 2020.“

The added bandwidth is vital. Akamai, a leading CDN (content delivery network), reported that data traffic has grown by 1,600 percent over the past five years. The move to stream video has only just begun.

With more capable phones and tablets being used and more content coming, the industry is making the push to meet consumer demands.

Theoretically, 5G will deliver content at 100Mbps. In the real-world, the speeds are closer to 12Mbps. The industry is hoping to get performance up to 225-300Mbps.

“Facebook live and Snapchat captured a significant share of the live video market very quickly,” said Allan McLennan, president of PADEM Group. “There’s a need to provide new overall standards so that new entries can help expand the category and be competitive versus being currently expensive and not as efficient for the consumer.”

“Most of the participants in the industry want to avoid the introduction of competing, non-compatible standards and protocols such as those we saw in the past with VHS/Beta and DVD standards.” As a result, McLennan projects that there is a tremendous opportunity now that we’re connected and viewing on multiple screens.

Voice service has remained relatively flat in recent years. Wireless carriers have made a major switch to unlimited data plans to gain market share.  The all-you-can-consume plans encourage customers to remain on their networks rather than switching to Wi-Fi networks to avoid costly data overage charges.

The move could result in savings for public spaces like airports, stadiums, Starbucks, and other businesses because the need to continually upgrade systems and services would be reduced.

“Video Growth – Video content is here today and the available news/entertainment rich content will continue to grow and so will the demand.”

NAB (National Association of Broadcasters), will have a strong mixture of broadband, satellite and wireless services moving forward as the industry begins to adopt the new reality of content anywhere, anytime, on any device.

After the industry representatives leave the bubble of NAB, the vendors, technologists, and broadcasters) will come together for the Connected Age (ETCA) Conference to be held May 8-9, at the Microsoft Silicon Valley Campus to redefine the entertainment experience.

This event is open to engineers, creatives, and researchers who share an interest in the future of connected entertainment. Conference attendees will explore the connectivity convergence, bandwidth, and technology.

If they come out of the conference with a clear direction for the industry that can be implemented and everyone can and profit from, it will be a major milestone.