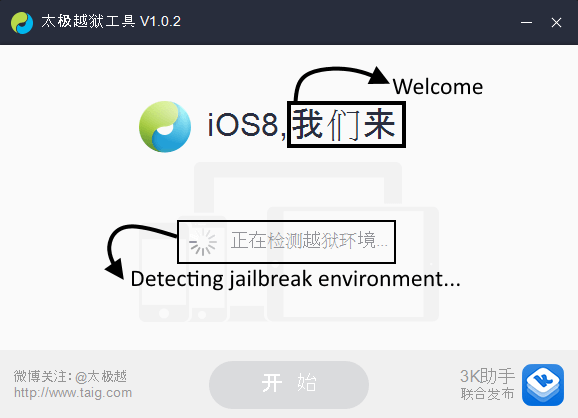 TaiG group are yet to globalize their iOS 8.1.1 jailbreak tool for the world in English; they’re focused on fixing bugs at the moment. We have translated all important Chinese text in their TaiG Windows app to English using Google Translate. Check out the images down below. 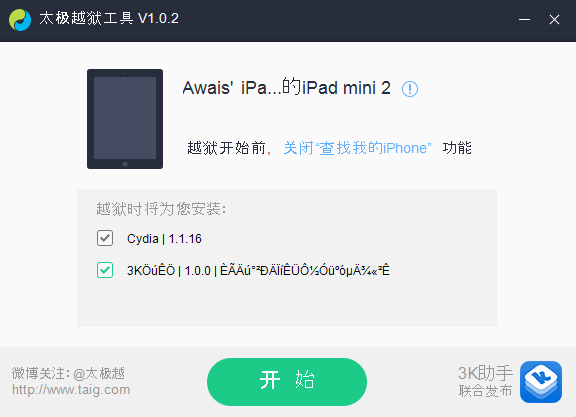 Update: Official English translation for TaiG is out with a re-release of v1.0.2.

As it was developed by China by Chinese developers, the tool is completely in Chinese. Rough English translations have been released online, but they aren’t easy to read since the translations are in text, while the tool, well, is a software that runs on Windows. It is difficult to see which Chinese phrase translates to which English phrase.

Our solution is simple. We have download the latest version of the TaiG jailbreak for iOS 8.1.1 (as of typing, 1.0.2.1), run it on our Windows PC, and used the camera option in Google Translate to translate important pieces of Chinese instructions to English. The resulting translations have been put directly into screenshots of TaiG jailbreak tool itself.

In order to follow our translations, you must launch TaiG jailbreak without having your iPhone or iPad or iPod touch connected.

Disclaimer: CupertinoTimes used Google Translate for Android for translation. We are not to be held responsible in case any inaccurate translation causes any problem. Proceed at your own risk.

The bottom text also says ‘TaiG is verifying jailbreak version’ before saying ‘detecting jailbreak environment’, but we didn’t deem it necessary to show that in a separate screenshot since it flies by so quickly. 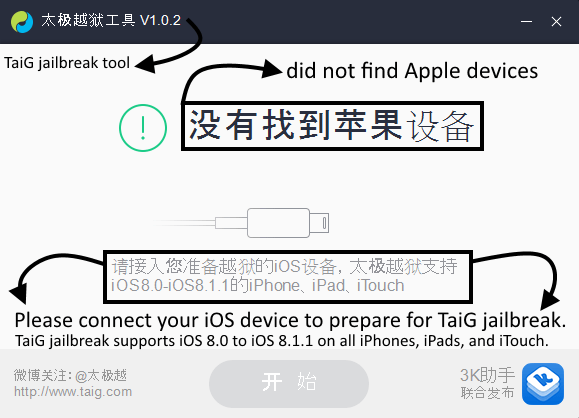 Self-explanatory. The tool asks you to connect your iOS device so it can prepare for the jailbreaking process.

Turn off features before jailbreaking 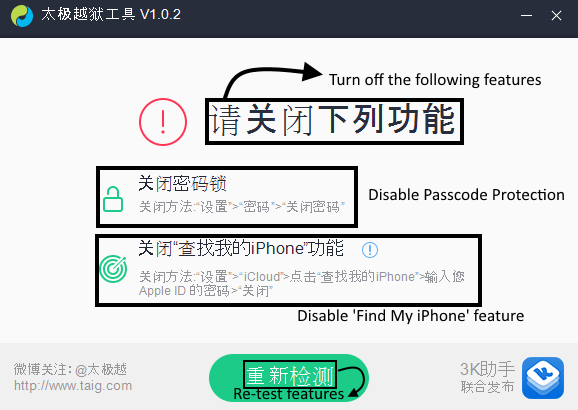 TaiG asks you to disable Passcode Protection, and disable Find My iPhone before it can prepare for jailbreaking process. Once you have disabled both features, you can press the green button at the bottom to re-check if those features have indeed been disabled. 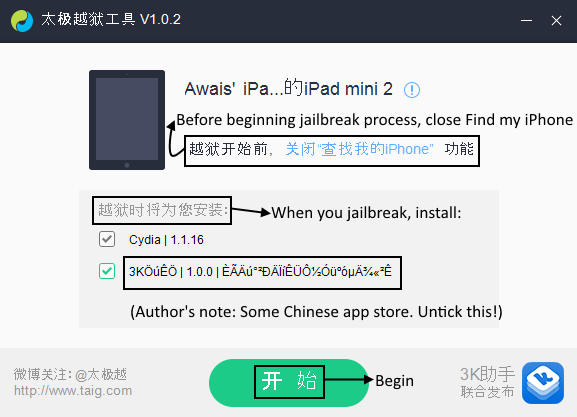 Pretty self-explanatory. Your device has been detected. You are warned again to be sure to have disabled Find my iPhone. You are allowed to select what to install after jailbreaking. The first option is of course Cydia itself, and the second is some Chinese app store that you probably do not want to install; untick that!

Once you’re ready, click on ‘Begin’ at the bottom to begin jailbreaking!

We will be sure to update this post when the actual, official English-translated version of TaiG jailbreak comes out. Until then, this shall suffice we suppose.