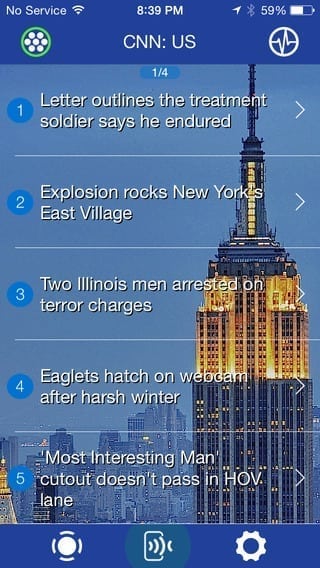 The article starts, “Over on Reddit’s jailbreak subreddit, a blind jailbreak enthusiast posted a $1000 development bounty for an RSS reader which would allow said enthusiast to listen to RSS feed items, after activating through Siri using their voice”.

So a developer on the Reddit Subreddit came up with the Siri-based RSS reader for iOS and claimed the bounty.  Not a bad days work. The only catch is your device would need to be Jailbroken in order to use it.

On April 3, 2015 Intelligently Interactive, Inc. released ekko™ Player.  This app lets you use spoken commands to access news and web content on-the-go so you can take your eyes off the screen and listen to news and other content spoken to you.

I downloaded and installed this app and I’m impressed. It fits right into my workflow and is likely one of the more useful apps I’ve seen in a while. I am able to stay up-to-date on a number of feeds without having to stare at yet another screen.

ekko™ does not require your device to be jailbroken. I have run it on 8.2 and it’s running now under 8.3 since I updated IOS yesterday.

The developer says, “We set out to create a new experience for accessing web content. We want to do other activities like exercise, drive a car, or fold laundry and call up the news stories that we want to listen to. Fast-forward to now, we’re developing a platform to do this, enable spoken commands to control the playback of news and other web content. And we call this, voicecasting. ekko Player is our first release to the public.” 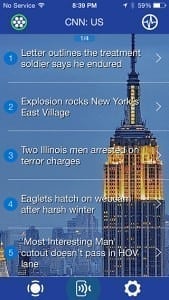 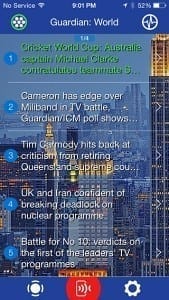 When you open ekko, you’ll see a list of headlines the app will read to you. The app will read the entire story to you when prompted. Currently, the following categories are supported: Business, Entertainment, Sports, Technology, US News, and World News. Within a category you can choose from several news sources to add to your favorite channels.

Once you’ve chosen your news, you can disconnect from the Internet and use spoken commands to control voicecasting, allowing you to do activities without needing to read a screen to access the content. You can also email the articles you like from within ekko and access the article URLs directly in your browser.

The developer says, We’re actively working to build on the current feature set of ekko to make it a robust voicecasting player with all the features you’d expect from a media player. Intelligently Interactive is based in NYC and is currently seeking its first round of angel funding. “We’re developing an entire platform around this and are actively working to build upon the current features.“

Needless to say, I for one will be watching this app. Aside from its obvious usefulness, the benefit to people with vision loss is enormous.

Checkout the ITunes Preview and download from the App Store.