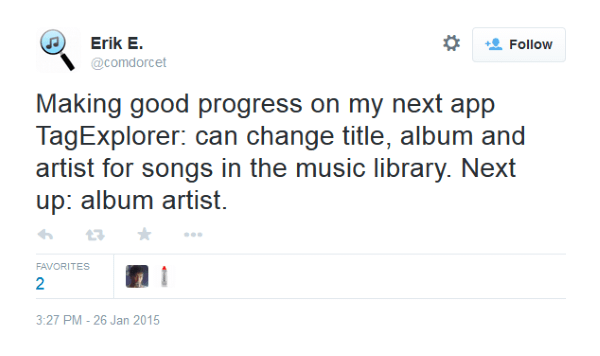 TagExplorer is an upcoming jailbreak tweak which allows you to edit song metadata / id3 tags in iOS Music App. You can easily change title name, artist name, and album name from your iPhone or iPad!

Just a couple days ago, we covered an jailbreak tweak / app by the name of ShowSongMetadata which allows you to view each song’s metadata within the stock iOS Music app. It would show the song’s title, artist, album artist, genre, year, comments, play count, skip count, the last time the song was played, and a whole lot more.

That is great and all, but what if you want to edit any one of those metadata attributes? Those of you who keep their music library fully organized and sorted will know that you can edit song metadata within iTunes. Then, you can sync your music and have the updated metadata appear in the iOS music app.

TagExplorer by Erik E. is a new, currently-in-development tweak which allows you to edit songs metadata. The metadata is limited to the song title, artist name, and album name.

As aforementioned, the jailbreak tweak is being developed as I type this. It is not available at the moment, but we expect it to be ready, and released in a matter of days (rather than weeks or some other, bigger unit of time).

Based on our analysis of the developer’s history, TagExplorer will cost around $1 or $2, and will be available in Cydia under the BigBoss repo. We will write a separate, dedicated post on TagExplorer when it is actually released.

For now, it is best to prepare for the tweak. Go ahead and jailbreak your iOS device on iOS 8 using TaiG for Windows, or PP for Mac. Cydia will be automatically installed, and then you can easily search for jailbreak tweaks to install.