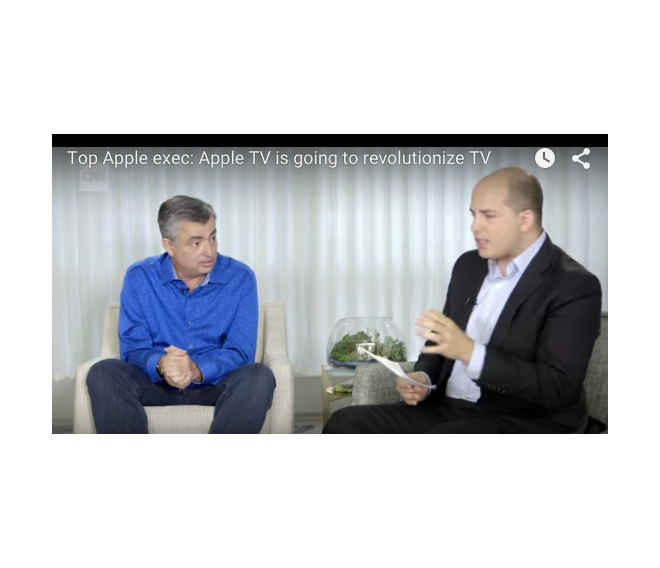 Apple executive, Eddy Cue had a recent interview with CNN Money where the topic was the new Apple TV 4th genration that went on sale last week.  When the conversation turned to “the future of TV is apps” Eddy was quick to point out the closed environment of cable versus the interactivity that’s possible with the new device through developer created apps.

When asked if Apple views Apple TV as a replacement for the set-top cable box, the response was and I’m paraphrasing, that the experience on Apple TV is much better.  Even though, many of the content providers on Apple TV require authentication.

I personally find this particularly annoying with the network apps since I can access NBC, CBS and ABC for free with an antenna.

When asked if Apple will become a provider of exclusive content themselves, he responded saying that “We don’t try to do things that are exclusive.” Paraphrasing again, We build technology that lets developers do things that aren’t being done by anyone else.  Apple has always worked closely with its partners. We’re great at technology and they’re great at creating content.”

So does this mean that Apple is not entertaining the idea of producing its own exclusive content? I don’t think so. What I mean is that I don’t imagine Eddy Cue sitting in a director’s chair shouting “ACTION”, but I do see Apple licensing and financing exclusive content.  Competition is tough in this space and having content that is only available on your platform is a powerful edge.  Apple has the means to make this happen and it makes perfect sense.

With the prospect of an Apple TV subscription package at an affordable price, eventual Apple exclusive content, loads of free content available from existing and future providers, games, a dedicated App Store with all the content possibilities that implies, not to mention the Apple TV 4th Generation serving as a hub for smart home devices developed using the HomeKit framework, I fully agree that Apple TV is the future of television and it’s about time.