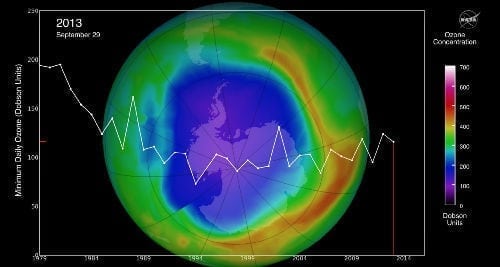 Before we move on to how the Ozone layer has repaired itself, let us begin with what the Ozone layer is. It is a layer in the Earth’s atmosphere (the stratosphere region) which is responsible for absorbing the Sun’s ultraviolet radiation. The Ozone layer was discovered by French physicists back in 1913. It absorbs 97 to 99 percent of the Sun’s medium-frequency ultraviolet light (from about 200 nm to 315 nm wavelength). This would otherwise damage exposed life forms near the surface.

Over the years, the Ozone layer has been prone to damage. It has slowly been depleted and is the main reason behind global warming. The chlorofluorocarbons (CFCs) and bromofluorocarbons (BFCs) are highly stable manmade compounds. They can rise up to the stratosphere where Chlorine and Bromine radicals separate by the UV light. This can start a chain reaction which can break down ozone molecules.

There have been efforts to minimize the depletion of the Ozone layer ever since a hole was discovered over Antarctica. There has been no evidence that the efforts were working and if the hole was being fixed until now. 30 years after the Montreal Protocol was adopted, evidence has presented itself and shows that the efforts are actually working.

The Montreal Protocol on Substances that Deplete the Ozone Layer is an international treaty. It was designed to protect the ozone layer by phasing out the production of numerous substances that are responsible for ozone depletion. Researchers from NASA’s Goddard Spaceflight Center made use of data collected by NASA’s Aura satellite. It measures a suite of trace atmospheric gases to understand changes to the ozone layer, Earth’s climate, and air pollution.

“It kind of surprised me that no one had done this,” lead study author Susan Strahan told Earther. “The data is there if you’re careful about what data to use.”

Susan Strahan and her colleague Anne Douglass went over the data of Ozone layer levels above Antarctica. This data was from 2005 to 2016 and discovered that there was a 20% decrease in the ozone depletion. Then they saw the concentration of hydrochloric acid in the layer and as expected, the level of chlorine had fallen as well.

Bill Randall, an atmospheric scientist at the University Corporation for Atmospheric Research has not been involved in the study himself but he told Earther that the analysis in the study was done wonderfully. He said,

All the efforts to eliminate the threat to the Ozone layer are finally working. The hole will not be completely closed until somewhere between 2060 and 2080. But it is an improvement and I agree with Susan Strahan,

“It’s nice to have some positive environmental news for a change.”

In this video, Susan Strahan elaborates on this topic.