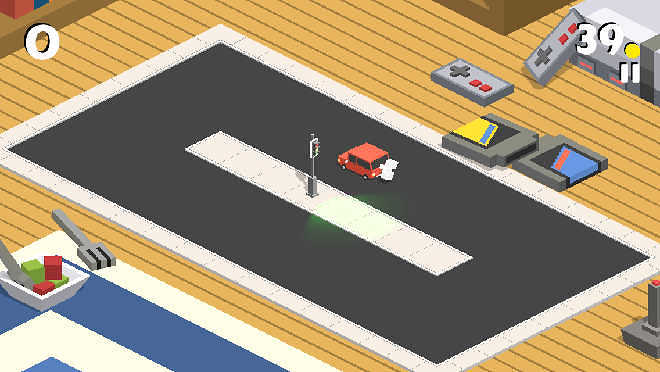 Known as one of the most annoying, yet addicting, games that I’ve ever played, Drivey Car is seriously just pure fun and annoying. Having a similar design to that of Crossy Road and Smashy Road, Drivey Car is an awesome and colorful driving game that allows you to only turn in one direction left. While this may seem as simple as a game can get, it clearly isn’t once you start playing it.

The object of the game is to carefully and endlessly make complete cycles around the road that you can before hitting the edge of the road or the island that sits deviously in the middle of the runway. While this may not seem too hard, remember that you can only turn in one direction, meaning that if you turn too much, there is no way that allows you to turn right just a little bit in order to avoid the edges of the island. The cool part about this game is that you can unlock new cars for coins, which are given for free every once in a while by the game in the form of gifts, or for money (ranges from $0.99 to $1.99). My personal favorite is the ice cream truck, which has the famous kid songs from our childhood playing, but these cars range from luxury, sports cars to the Mystery Machine, tractors, and the DeLorean. They can be bought or randomly picked by the game for coins. The roads vary from farms all the way floating bridges, depending on the car. For example, a tractor would run on a farm.

I’ve been playing this game for a couple weeks now and it has been killing my nerves. While it may seem like a simple, fun, little game with a self-explanatory goal, the carefulness that you have to take makes this game so complicated. Yet, it is a lot of fun to experiment with your approach and pull your hair out while you’re at it.

Drivey Car is available on the App Store for free. Can’t wait to check out more apps by Apricity Labs!