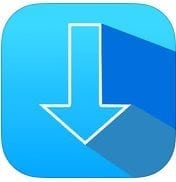 Historically, Apple has never officially allowed apps on iPhone and iPad which even slightly encourage illegal activity. This is the single most important reason why you cannot download torrents on your iOS device. If you’re feeling adventurous, you can jailbreak it, and install a suitable tweak on Cydia – not simpler than downloading off the App Store, by any means. Today, however, we just came across an iOS app that allows you to download torrents directly! Grab it before it gets pulled off the App Store!

This isn’t the first time an app has sneaked past Apple’s strict filters for the App Store. Many a times in the past, we have seen emulators for retro game consoles launched on the App Store, despite being against Apple’s terms and conditions. Developers often achieve this by hiding functionality within the app.

The app we are talking about today – Blue Downloader – poses as a just-another iOS app for downloading files directly off the internet. In addition to this functionality, though, you can download .torrent files to download large pieces of content in the form of movies, TV shows, games, books and more. 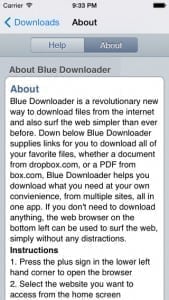 The Catch: Blue Downloader works only with legal torrents

There is a catch, however. Based on what’s written on the official website, you can only download torrents from a pre-selected list of torrent aggregation websites. These include LinuxTracker, PublicDomainFlicks, certain BitTorrent Bundles, eTree, and BitLove – websites which only list torrents for non-copyrighted content. This makes downloading them fully legal, but we are not sure if Apple sees them way. Torrents and illegal activity go hand in hand, so Cupertino might not want to have its name tarnished for it.

Blue Downloader works on all iOS devices running iOS 7.1 or later. It is optimized for iPhone, but of course you can install and run it on your iPad. It is available for $2.99 from the link below. 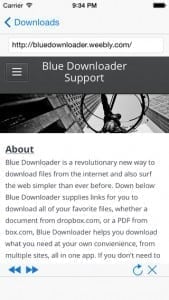 If you do download the app, don’t forget to let us know what you think of it by leaving a comment below.

Stay updated with the best apps, tips, and tricks for Apple by liking us on Facebook, following us on Twitter, or subscribing to our RSS feed.