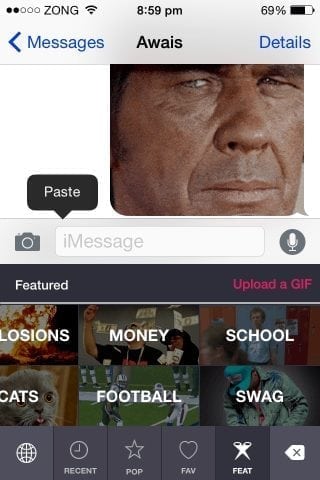 PopKey – arguably the most anticipated GIF keyboard for iOS 8 – is now available for download. Does it live up to the hype that surrounded it a few short weeks ago? We find out after the jump.

Not The First GIF Keyboard In The World…

PopKey GIF Keyboard for iOS 8 directly competes with Riffsy’s GIF Keyboard that was released recently. I have been using Riffsy’s keyboard, and I find it to be fascinatingly awesome especially when texting with millennials who often express their emotions with GIFs.

GIF Keyboard’s weak-point, though, is its gaudy user interface. With blocky tiles, bad type design, low-resolution GIFs that load too slowly, and generally stuttery performance on my iPhone 4S, I don’t look forward to using it. I just use it because the end-product – a nicely animated GIF – is worth it.

PopKey claims to be the ‘world’s first animated GIF keyboard’ but I believe they will need to change that considering ‘GIF Keyboard’ itself was launched first.

… But Certainly The Most Well-Designed GIF Keyboard 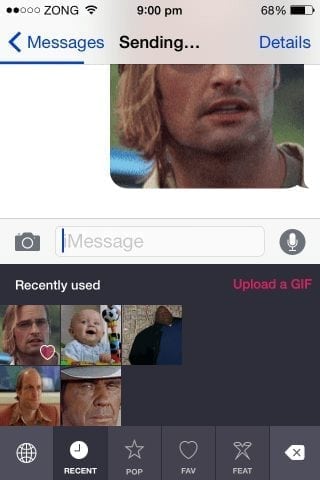 What PopKey can claim to be is the world’s best-designed GIF keyboard. It looks utterly fantastic! Everything is laid out in an aesthetically pleasing manner. GIF previews load in over smooth animations. Copying GIFs shows loading progress (unlike GIF Keyboard). Pasting always works.

After using GIF Keyboard for a while, using PopKey was a breath of fresh air.

However, this initial excitement quickly dies out when you realize PopKey doesn’t work at all in the most popular messaging apps. PopKey will only let you copy & paste GIFs inside the Messages app. Period.

It is hardly PopKey’s fault that Facebook Messenger or WhatsApp don’t support GIF playback, but they could have gone down ‘GIF Keyboard’s path by converting GIFs to videos that you can easily attach and send to your friends. Videos are, after all, supported by popular messaging apps.

This small but ultimately deathly limitation is why – despite its terrible design – I will carry on using ‘GIF Keyboard’ for sharing animated GIFs. Until PopKey comes with up a way to let users share animated GIFs (or videos) over Messenger and WhatsApp, or said apps start natively supporting GIFs, I do not see it gaining much popularity.

PopKey is available for free and works on all iOS devices running iOS 8 or later.