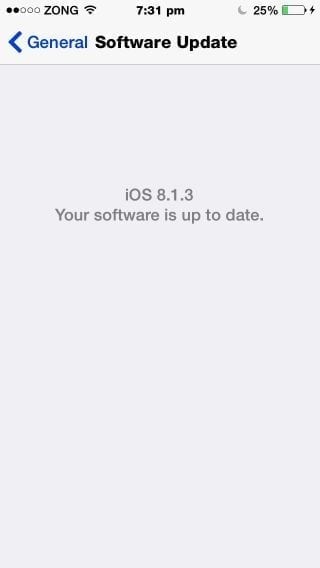 Update: As it turns out, you must also downgrade iTunes 12.1 for this to work.

Earlier today, Apple released an incremental update to iOS in the form of iOS 8.1.3. As expected, it does not introduce any new features, but it does indeed come with several unspecified bugfixes, and performance improvements.

However, there are two little-big improvements that almost everyone will notice. One will be appreciated by those with smaller storage space-equipped iPhones and iPads, while the other will cause disappointment.

First and foremost, updates after iOS 8.1.3 will not require several gigabytes of free  storage space in order to download and install. Apple has tweaked the way iOS devices upgrade, finally.

Secondly, the vulnerabilities used by TaiG jailbreak have bee plugged! In other words, iOS 8.1.3 cannot be jailbroken!

The second reason is why it is strongly recommended for jailbreak enthusiasts to a) avoid updating their iOS device and b) in case they have already updated, they downgrade to iOS 8.1.2 immediately.

Step #2: Connect your iOS device to your PC or Mac.

Step #3: Open up iTunes. Click on your iOS device from the iPhone / iPad-shaped icon in the top-left corner.

Step #4: Shift + Left Click on Restore and select the IPSW file you downloaded in Step 1.

When you’re done with everything, you will have downgraded iOS 8.1.3 to iOS 8.1.2, thereby being able to jailbreak your iOS device, and enjoy the world of jailbreak tweaks and apps!