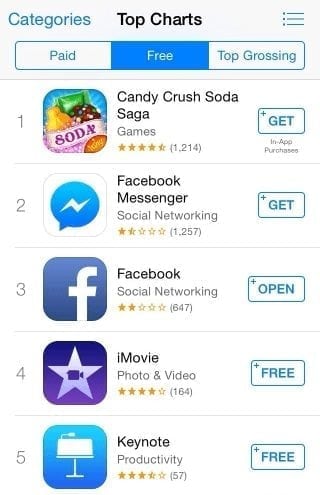 Apple recently changed ‘Free’ to ‘Get’ for free apps in the iOS App Store. Why did they do it? Is there any difference between ‘get’ and ‘free’? We briefly explain things after the jump!

Since the App Store launched in 2008, apps have always been divided into free and paid. Free ones were completely free, of course. With the advent of in-app purchases – mechanisms through which you could purchase / unlock content and features in apps – the difference between ‘free’ and ‘paid’ blurred quite a bit. Developers would publish apps as ‘free’, but would lock away most features with in-app purchases.

What started happening was children would create major financial problems for their parents when they bought hundreds of dollars worth of in-app purchases. Parents placed pressure on European regulators who in turn pressured Apple to change the way they published ‘free’ apps, versus free apps with in-app purchasable content.

Apple made two changes to the App Store as a response. Firstly, it is now written quite clearly underneath the download button when an app comes with in-app purchases. Secondly, and more recently, Apple replaced ‘Free’ with ‘Get’!

Apps that do not charge any money up-front remain categorized as ‘free apps’, but the button for downloading them now says ‘GET’ instead of ‘FREE’.

I personally don’t mind the changes. I mean, it would be stupid if I let anything so trivial as a change of a trivial term affect me (like it is affecting certain people on the Internet). Apple is making it clear to parents and general users alike that they are getting the app for free, but it comes with in-app purchases.

So there you have it!

Conclusion: The button for downloading free apps in the App Store now says ‘GET’ instead of ‘FREE’ because Apple is responding to pressure from EU regulators to clarify the difference between free apps, and free apps with in-app purchases (like Candy Crush, Clash of Clans, etc.)