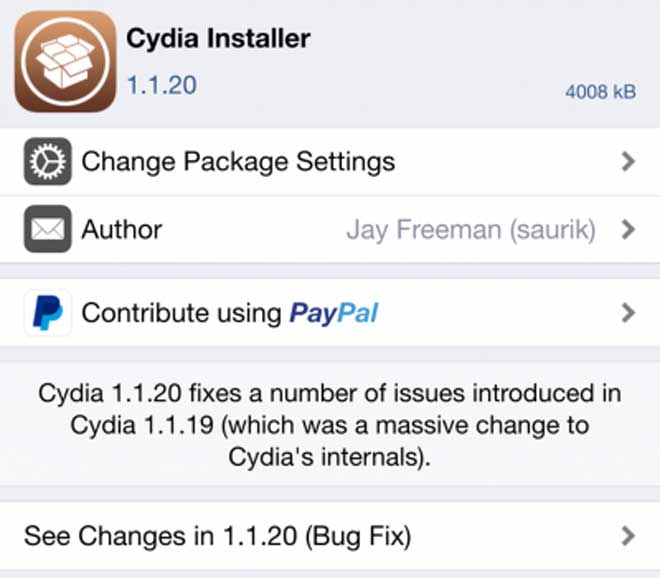 Cydia, for jailbroken Apple devices, is somewhat equivalent to what google play is for all Android users. This analogy works because it allows its users to browse through and install applications on their jailbroken Apple devices. Understandably, any releases for Cydia cause quite a stir in the world of an Apple user. One such instance occurred just two days ago when Cydia v 1.1.19 was released by its developer, Saurik only a few days ago.  TiaG also released its v 2.3.0 on 3rd July 2015 which integrated Cydia’s 1.1.19 version. This version proved to be a very big change because it ran the Cydia installer to run as mobile instead of as root. Resultantly all modifications that are added to your iPhone will also be added to Cydia. So if you don’t like Cydia’s look you can now change it!

However all has not been smooth sailing for the new version and a few bugs were detected by the users. So, Cydia v 1.1.20 ; A ‘bug fix release’ by Saurik debuted on July 5th 2015. Saurik himself called this version a ‘bug fix release’ and has managed to address almost all issues that had arisen in v 1.1.19.

We will mention a few of fixes Saurik has provided.

Hiding option crashes Cydia: A fix is included in the new version for when Cydia crashes after you select ‘Hiding On’ in Sources.

Another is included for Ignore Upgrades: The issue was that after you select ‘Ignore Upgrades’ in “change Package Settings”, the feature wouldn’t work.

Fix Half Installed Package was not working: If a package was not fully installed for whatever reason,  Cydia would offer to install it/ fix it for you. However this feature was also faulty. So, in the new version this has been fixed.

These are all the fixes to bugs reported in the previous version. There is another change however. It seems that in the previous version (v 1.1.19) Saurik forgot to mention a new feature in the changelog, leaving people unaware of its existence. What this feature does is that it allows you to include all third party sources on Cydia if you backup your device on iTunes and select restore and then put the backup on your phone and jailbreak it again. So you are safe from the misery of entering all the information again!

Just upgrade your Cydia installer to access this feature and fix the bugs in the previous version!