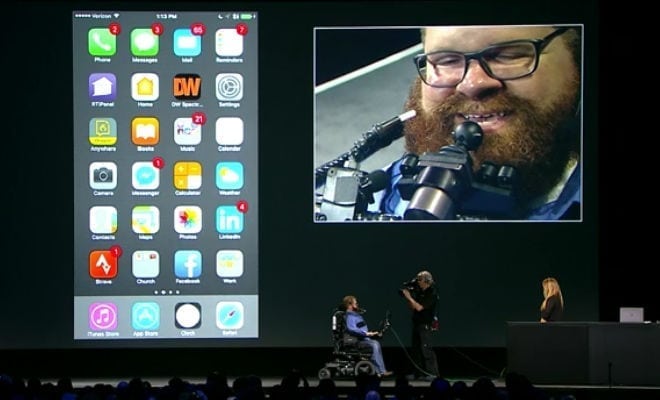 At WWDC 2017 Apple hosted a lunchtime presentation titled “Convenience For You Is Independence For Me”.  This was a journey through a man’s life as a quadriplegic and how technology not only gave him a purpose in life but it also gave him his independence.

The man is Todd Stabelfelt. At eight years old Todd’s spine was severed from a shooting accident. He has been paralyzed from the shoulders down, ever since. Todd is affectionately known as the QuadFather and he possesses an awesome sense of humor.  He looked at his disability as merely something he needed to “deal with” and simply moved on with life which is amazing in itself.  Todd worked in the technology field as a Database Programmer and Administrator.  Today he is an entrepreneur and the CEO at C4 Database Management.

One of the most frustrating things for a quadriplegic was seeing all this technology being developed over the years and realizing the potential it holds for independence. It was all so promising and so close but to make any of it work, you needed to press a button. Something so simple that is taken for granted by most of us yet a significant hurdle for a one who does not have use of their limbs.

Todd tells us how his life changed when he switched from his Blackberry to an iPhone.  Enter Siri and Switch Control in iOS 7. The idea that Siri could interact with Apple technology using voice commands was a game changer for Todd as well as many others. Voice recognition, dictation, voice activated commands were a giant leap forward towards the independence Todd spoke of. He described the first time he created a calendar appointment using Siri. Or being able to text his wife with no one needed to assist him. Todd went on to demonstrate his ability to use Home Kit enabled devices. He turned lights on and off, opened a locked door and managed his home’s security.  Again, simple tasks we take for granted yet a monumental accomplishment for Todd.

My mom, bless her soul, taught me to put myself in someone else shoes and try really hard to understand their reality. Even with that good advice, I can only imagine the feeling of liberation and empowerment that Todd felt when he experienced these firsts.

The technology from Apple is inclusive.  It has the ability to connect all of us. With the combination of Apple’s Switch Control and Siri in iOS, assistive devices from Tecla and the state of the art Permamobile chair, Todd found the independence he was working so hard to achieve. If you’re down, with or without a disability, Todd is a worthy example of courage, drive, and perseverance in the face of a truly difficult circumstance. Todd has reached his goal to be valued and to have a purpose.  To Todd, all I can say is, “Yeah Bro!”

Download the WWDC 2017 app and check out this presentation in its entirety.