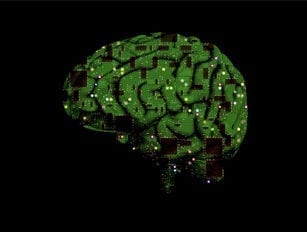 The Cold War between the US and Russia was said to end in 1991, largely as a result of the economic circumstances in Russia at the time, rather than ideological changes. The 25 years which happened prior to that end, was characterized by ongoing political hostility between the West and the East and an arms race, under which untold billions of dollars were invested in nuclear weapons, among other things, by both sides of the Iron Curtain.

Many believe that we are now returning to a Cold War of a different sort, with a new enemy – China. Against a background of daily rhetoric on TV News channels concerning potential Trade Wars between the US and China, this arms race could take place on a different battlefield, that of Artificial Intelligence (AI).

China missed out on the first internet boom in 2000 and has learned its lesson. This time, they’re being proactive about using their core advantages to own the area. China has openly stated that they want to be the world leader in AI by 2030, a market, which, by that time will be worth $150 billion per year.  They are hiring more AI staff than the US and undertaking a more organized, centralized, government-led approach to the problem than America. One enlightening concerning statistic indicating China’s progress in the field is the number of research papers being produced in both countries. China is ahead and by some way. 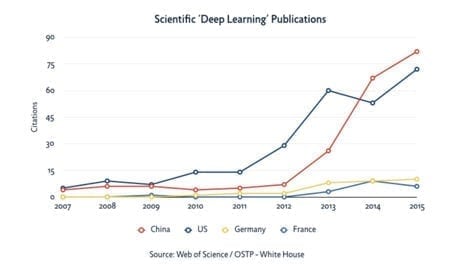 China now leads the world in the submission of white papers on ‘Deep Learning’ – a proxy for AI.

Ironically, Russia’s President Putin paraphrased the famous American President Lyndon B Johnson recently, suggesting of Artificial Intelligence what LBJ had said about Space Travel at the height of the space race in the 1960s – “Whoever becomes the leader in this sphere will become the ruler of the world,”

The lessons being learned through civilian test applications of Artificial Intelligence are being used in the military arena of both China and the US. Both governments are producing prototype autonomous fighter jets, AI managed drones and are known to be working on ‘autonomous killing machines.’ (In the US, with some help from Google.)

More immediate military threats come from the inclusion of Chinese electronics equipment in US telecommunications and energy transmission equipment. Alongside AI, the biggest technological change since the iPhone was released is about to take place as 5G networks are rolled out by each of the 4 big US cellular networks.

5G networks offer fiber connection broadband speeds over the air, coupled with power requirements that will allow batteries to last 10 years. Only three months ago, The Trump administration took the almost unprecedented step of suggesting that the US Government build America’s own 5G network, to preclude the possibility that Chinese components could be used in the future to cut domestic US communication lines in times of conflict.

What makes China so dangerous, when it comes to AI, is the volume of data they can produce.

AI works on what is effectively pattern matching, and it’s easier to spot the patterns if you have more data (all other things being equal.) China’s population, at around 1.4 billion people is 4 times larger than that of the USA.

China is only too aware of the advantage it has in the area and is taking steps to both protect it and limit competitor nations from having access to the same information. Cybersecurity laws, put in place by the communist nation requires all firms operating in China to store their data in the country. Apple, for example, is having to build their own data center in China to offer iCloud services and pursue their goal of expansion in South East Asia. Conversely, China’s data ownership regulations are so opaque, some Western companies – like Google – are taking a step back from investments in the country.

Summing up the AI Cold War

AI is already part of 85% consumer digital interactions in the USA. It’s behind every search you do, every Spotify playlist you have and behind many of the hacking attempts that take place, both of private businesses and government bodies. For example, when the Russians hacked the Pentagon.

China is quietly proceeding on a number of fronts, to threaten the US. AI is just one of them. China is enlisting support from Hollywood for so-called soft power, they’re buying US Treasury Bonds, one effect of which is they now exert a trillion dollars’ worth of influence on the US economy. They’re building what appear to be military bases, out of sand, in the South China Sea.

Judged by the smiles, handshakes and cordial visits between the leaders of the US and China, there does not appear to be a Cold War. Look behind the curtain, however, and a 21st Century arms war, centered around AI and technology investments is perfectly clear.

Network effects associated with many internet related services explain why most people use Google and no competitor product, and why the same is true of Facebook and Netflix. From a military standpoint, the network effects of AI could give the country which has the first workable AI solutions a ‘Winner Takes All’ advantage. It appears that the stakes of this threat are just as serious as those provided by the red button of the original Cold War.

Neil Aitken is the editor in chief for WhatPhone.com.au. He has worked on small business telephony solutions in the past and has written on the subject of telco trends, innovation and SIM Plans for Business Insider, The Sydney Morning Herald, Vodafone Australia and Savings Room, one of Australia’s leading blogs.