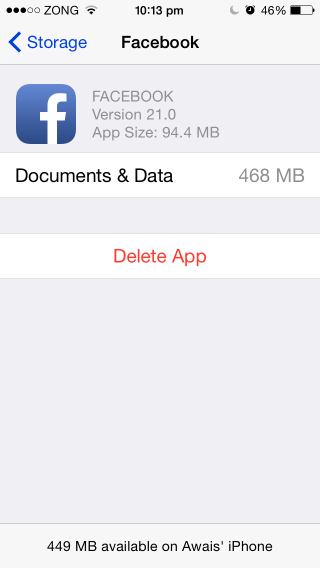 CacheClearer is the latest free jailbreak tweak by Ryan Petrich which allows you to delete and clear documents & data on an app-by-app basis from Settings > Usage > Storage > Manage Storage.

Ryan Petrich is one of, if not the most prolific developer of jailbreak tweaks and apps. He has developed popular jailbreak tweaks / apps like Activator, DisplayRecorder (iRec is a good alternative), VideoPane, FullForce, and SendAny to name a few.

Petrich’s latest creation – CacheClearer is a great example of a jailbreak tweak that follows the Unix philosophy of small but efficient utilities. It allows you to clear documents & data on an app-by-app basis from Settings > General > Usage > Manage Storage > [Any App].

There are certainly other apps that can clear documents & data, but as far as I know, they do not let you easily do that on an app-by-app basis.

iCleaner – the most popular alternative I can personally think of – by default selects all installed apps on your iOS device, and offers to clear documents & data for them. You have to individually deselect the ones you do not want cleared.

CacheClearer is different in this aspect. Additionally, what makes it really useful is that it is there when you need it: you can clear documents & data on an app-by-app basis by going to the specific app under Settings > General > Usage > Manage Storage.

CacheCleaer is currently available as a beta, so there may be bugs and unexpected results. We recommend avoiding it unless you have a serious storage problem. Just use iCleaner instead for the time being.

Of course, we cannot stop you if you wish to check it out. Assuming you have jailbroken your device on iOS 8, launch Cydia, go to Sources > Edit > Add and type in http://www.rpetri.ch/repo. Once Cydia is done indexing Ryan Petrich’s repo, you can search for CacheClearer and install it for free.

We will be sure to discuss any significant updates to CacheClearer, but the way Ryan Petrich works, we expect it to remain lean – a simple tweak for clearing documents & data on an app-by-app basis from Settings. Expect only bugfixes in the future.