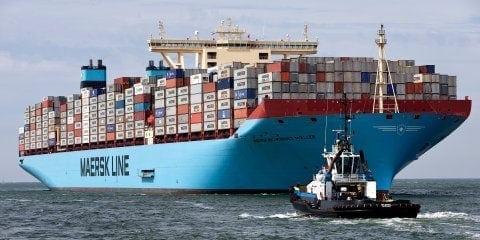 We previously saw the plans for a self-driving electric container ship by the Norwegian company Yara, but it does not set sail until next year. China, on the other hand, did not plan to wait that long and has already launched an electric cargo ship. This ship can carry 2,200 metric tons of cargo. It was launched last month in the province of Guangzhou, as reported by China Daily.

The all-electric cargo ship was constructed by Guangzhou Shipyard International Company Ltd. The ship has a length of 70.5 meters (230 feet). It travels at a speed of 12.8 km/hr (8 mph) and has a battery capacity of 2,400 kWh. It can travel around 80 km (50 miles) on a two-hour charge. This charge time is the same as the time required to unload the ship’s cargo when it is docked.

“As the ship is fully electric powered, it poses no threats to the environment,” said Huang Jialin, general manager of Hangzhou Modern Ship Design & Research Co, the company behind the ship’s design. “The technology will soon be likely … used in passenger or engineering ships.”

The same design and technology are being put into use for the planning of future launches of similar ships with different kinds of cargo and passengers. Wang Yongchen, a Beijing environmentalist, commented on the news.

“This kind of ship takes into consideration the harmony between humans and nature and can protect water quality and marine life, and should be copied by other ships sailing on local rivers,”

There are two primary benefits to the all-electric cargo ship. The first one is that it will emit no carbon emissions during its voyage. Cargo vessels are one of the biggest carbon pollution sources in the entire transportation sector. Secondly, the cost of transporting bulk cargoes will go down as electricity is much cheaper than diesel fuel.

Now comes the ironic part, the world’s first electric cargo ship is hauling Coal. That’s right, the emission that the ship is cutting down by shifting to electric are being compensated by its cargo. It is still a step in the right direction and we might soon see a change in the cargo and the ship might be hauling parts for a wind turbine or solar panels. With the Norwegians following suit, we might see a number of other countries emulate this example. And why not, it benefits the environment and lowers costs associated with the shipping industry.