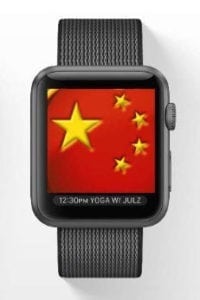 Its times like these when I am reminded just how precious the freedoms we enjoy and privacy really are.  After the release of the Apple Watch series 3 in China on September 22nd, the government saw fit to block the main feature of the device, cellular connectivity. The Wall Street Journal reported that LTE connectivity was cut off to the new Apple Watch on September 28th. The best guess is that this was due to a government concern of not being able to track or confirm who is using the device. As we used to say in the sixties, “That’s heavy dude”.

Unlike the iPhone, the new Apple Watch uses an eSim that is embedded in the device. It is not removable as is the Sim card in the iPhone.  In China, all cell phones use state-owned SIM cards that are issued by the telecom company. The government has a handle on these, meaning they can easily identify the user. However, the new eSims are apparently a bigger challenge. Until the Chinese regulators figure out how to tap into the embedded eSims, your series 3 Apple Watch will be disguised as a series 2 Apple Watch, at least in China.

The full-featured Apple Watch series 3 was briefly available from China Unicom. AppleInsider reported that Apple issued a brief statement confirming the situation, and referred customers to China Unicom. The Chinese regulators have not made any statement on the matter. Neither has China Unicom.

It will likely take months for the Ministry of Industry and Information Technology to figure out how they will deal with the eSIM. Once they have a handle on it they will likely issue an approval in the form of a formal certificate for operation.

On the apple.com/watch/cellular page it lists the three main carriers in China and availability for LTE on the new Apple Watch series 3: