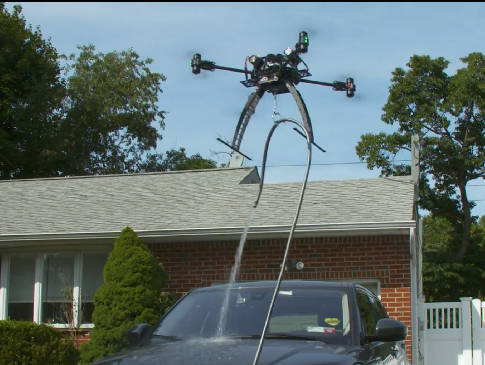 Drones have become the center of attention nowadays and everyone wants to own one. You must know at least someone in your social circle who owns a quadcopter.

What exactly is a drone?

Any form of unmanned technology that can fly and be controlled using a remote is termed as a drone.

Owning a drone is one thing and operating it efficiently and carefully, is a completely different topic. With the increasing number of people owning domestic drones, the government has taken into account that this might have certain threats as well. There are some rules to flying drones in countries like the United Kingdom. These rules include things like;

With the drones being used by the military, a number of photographers for their aerial shots, for the purposes of sports coverage and even being considered by home-delivery businesses to deliver parcels to homes or offices.  We have heard about another use for the drone recently. Any guesses?

Have you ever thought about owning a car washing drone? I certainly haven’t. If you fee like this is something you’ve gotta try then here are the steps to wash your car using a drone. They seem pretty tedious even while reading.

I think that there are certain constraints here with a car washing drone. The first being the fact that the direction of the water can’t really be handled as effectively as you would handle it with your own hands. In that case, you could let the water hit the areas that need the most attention. Secondly, the tires can’t be washed properly, as the water is simply flowing from the top of the car to the ground. You cannot pay attention to the dirt or the muddy areas on the tires. Thirdly, the drone is carrying the hose that is going to move around different areas of your house, it would make them flooded. Lastly, a lot of water gets wasted in this process. Which I think is unnecessary.

If you are a SUPER lazy person, you might like this idea, and you may want somebody to take care of all the mounting and unmounting.  If you’re thinking I just made this up, check out this video on Mashable.