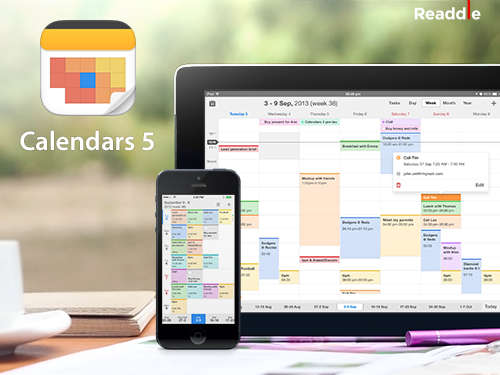 Calendars 5 is one of the best calendar apps for iOS devices. It has a very pleasing design which is easy to use. The application has gesture-based control along with the traditional tapping. Gesture based control allows users to swipe between days, weeks and months and also delete items. The application works smoothly with stock Calendar and Reminders App. Calendars’ 5 also allows the user to sync with native Google Calendar.

Many of the features available in Flexibits’ Fantastical are also available in Calendars 5. The application has a smart type auto detection feature which lets you add new events by simply giving input in Natural Processing Language. For example, if you want to add the event “Meet Alice at Starbucks at 5pm on Thursday” you can simply type or say this and the app will process it. The application will create an event at the given time, send an invitation to the person you are to meet and pick the place on Apple Maps or Google Maps.

Everybody has a different idea of what part of the calendar is the most important. The application hence allows users to set the startup screen according to their ideal view.

The application is highly recommended for iPad users as it has a very elegant design and is user-friendly for the larger screens. The application was introduced to the App Store back in 2013 and currently has four and a half stars in its reviews.