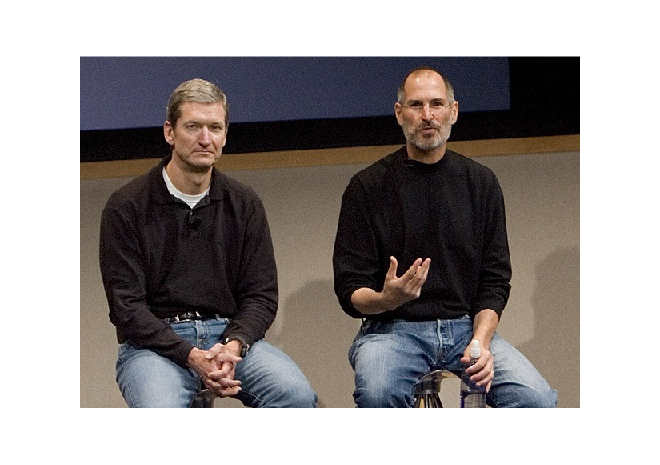 Business Strategies of Jobs and Cook

Early 2011 Tim Cook took the reins as Apple’s CEO from Steve Jobs. This resulted in a corresponding shift in business strategies implemented by Apple. Jobs stressed innovation while Cook emphasizes improvement. Jobs’ focus was to develop and introduce new products, according to his high set of standards, into the smart device market. Whereas, Cook’s goal is to build on Job’s standards and cement Apple’s increasing market share.

There has been much talk over which business approach is Apple worthy. In this article, we will look at both the business strategies of Jobs and Cook by performing a brief analysis regarding their related strengths, weaknesses, and opportunities.

From 1998 to 2010, Steve Jobs is responsible for Apple’s innovative brilliance – bringing us everything from the iMac to the iPad. Jobs also brought in no less than 141 patients under Apple’s umbrella. Jobs emphasis was on innovation and setting standards – and getting both of them right! This lead Apple to redefine the smart device market and the user-digital experience. Under Jobs, Apple became a benchmark of innovation.

Cook’s approach of strengthening and diversification of Apple’s existing products may not be as exciting as Jobs’ revelations. However, Cook’s approach has definitely grown Apple. Cook has managed to grow Apple’s revenue from approximately $15 billion to just under $50 billion between the third quarters of 2009 and 2015 respectively. Under Cook, Apple has reached a high of shipping 75 million iPhones. However, a high of around 20 million iPhones shipped was realized under Jobs in 2011.

Jobs and Cook are two very different Apple CEO’s. Steve Jobs’ approach was narrow-minded with its sole focus on innovation (to the near exclusion of other normal business elements). This was a much-needed focus on innovation, however; this should not serve as an excuse to delay paying investors their dividends by 17 years.

The past four years with Cook at the helm may be summed up with one word – boring. Jobs amassed 141 patents – that’s 139 more than the average Joe achieves! The most notable innovations under Cook’s belt are the Apple Watch and Apple Pay. I am in no way demeaning the Apple Watch and Apple Pay. It is the slow pace at which innovations are coming out that concerns me. Under Jobs (1997-2011) Apple was averaging approximately 2.6 innovations (not counting subsequent generations) per year. Cook has yet to catch up to Jobs’ pace.

The business strategy that Jobs employed ensured that, although viewed as a smaller player, Apple demonstrated that it was a market innovator. In 2010, the iPad was unleashed; allowing Apple to dominate the tablet market for two years while its competitors played catch-up.

Cook’s Apple has also made its mark on the personal computer and smart device market. Apple’s shares has grown to $700 billion. This was partly due to Apple making headway into China with a 763 million customer base. Under Cook’s leadership, Apple is experiencing increasing demand in other non-traditional markets; such as India and Japan.

To say that Tim Cook has undone what Jobs achieved, with a business strategy that is non-Jobs-ian, is unfair. Cook has taken the next logical step in preserving Steve Jobs legacy. That is to increase profits and market share through diversification and upholding Apple’s standards. By creating more product family options (e.g. the ranges of Macs, MacBooks, iPhones, and iPads available) for their existing clientele, Apple has ensured customer loyalty. Additionally, this removes the common interjection (from the haters) of Apple being a niche market. Thus, causing more potential customers to seriously consider Apple for their smart device needs.