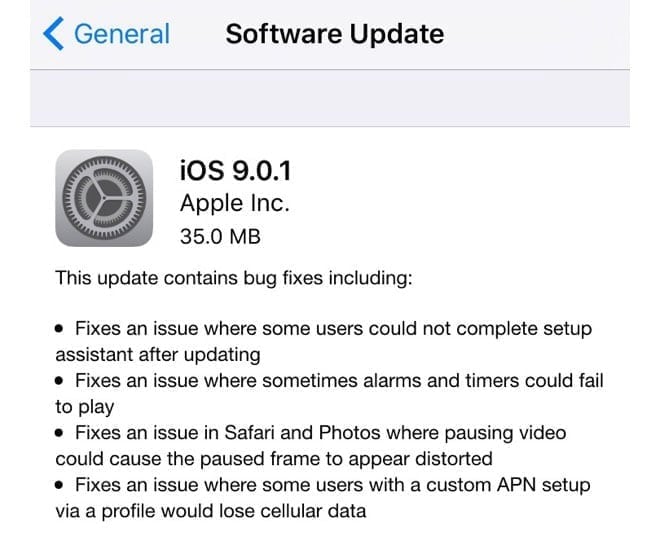 A week after the iOS 9’s official release, Apple has released the first update to their latest OS in the form of iOS 9.0.1 today. iOS 9.0.1 is a bug fix update, correcting many minor errors in the original release of iOS 9. It is recommended that you update to iOS 9.0.1 as soon as possible for better system maintenance.

One of the major problems iOS 9.0.1 fixes is the “Fail to update” error that would sometimes cause devices to freeze while upgrading to iOS 9 using the ‘Slide to Upgrade’ feature in the setup assistant. This was perhaps the biggest complaint regarding iOS 9, but should now be fixed after the update.

The new update also touches on more trivial problems as alarms or timers not going off or a video being distorted if it was paused when being played in safari.

iOS 9.0.1 is available to all iOS 9 users, to get the update, either connect to iTunes and check for updates from the device summary page, or utilize the OTA update feature which can be found in Settings à General à Software Update.

Users have been complaining about other bugs which weren’t addressed in this update as well. These include but are not limited to:

These problems will probably be addressed in the upcoming iOS 9.1 update, which will be the first major update to Apple’s 9th iteration of the iOS software. iOS 9.1 will also include new emojis and settings for familiarizing  the “Hey Siri” activation command for each individual user’s voice. The second beta version of the new iOS 9.1 was made available to developers today.