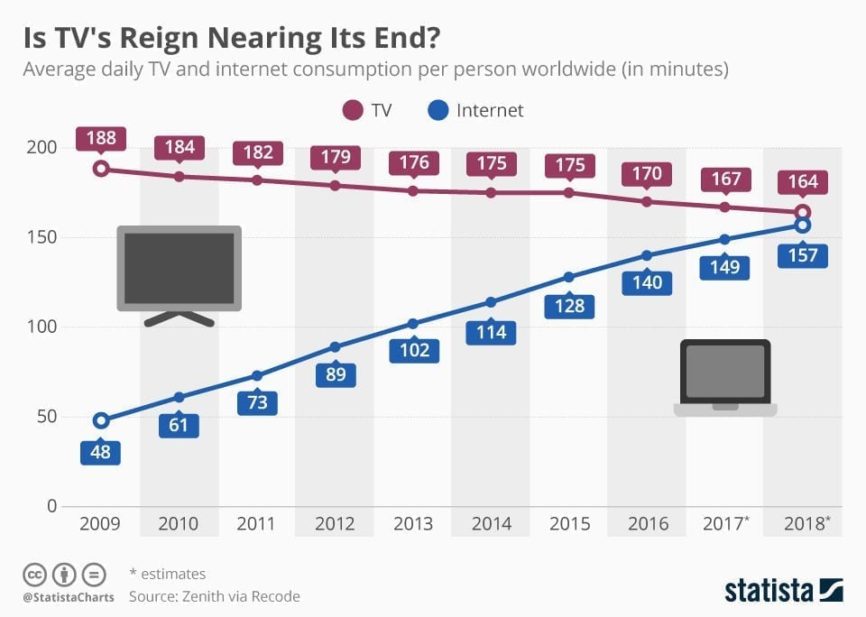 Broadcast TV was the undisputed champion for decades as far as daily consumption of media is concerned. It still is but it is steadily losing ground as internet consumption of media has risen sharply over the past 10 years. As this trend continues traditional broadcast TV’s reign could soon be coming to an end.

People spend more time consuming media than ever before. They have more choices and what’s more, they get to watch what they want when they want and on the device they want.  The fact that a lot of that media consumption occurs while on the go on mobile devices. Catching up on the news or our favorite episodic series while commuting on the train or bus or during a lunch break for example.

There is an old adage in advertising that says, “money follows eyeballs” and more and more advertising budgets are moving to online media outlets. The chart below shows this expected convergence of these two and if the trend continues the internet will surpass broadcast TV sometime in 2019.

It’s all about the viewing audience getting what they want when they want it.

For the first time in 50 years, we will see a complete change in the content distribution standard. The ATSC (Advanced Television Standards Committee) 3.0 has only just begun to be implemented. It is well established in South Korea in preparation for the Olympics. It is slowly being rolled out in other parts of the world. This includes the Americas, EMEA (Europe, Middle East, Africa), and the rest of Asia-Pacific.

ATSC 3.0 is a worldwide next-generation TV/broadcast standard. It is IP-centric and has advantages for both broadcast and broadband businesses. It promises to deliver “seamless convergence” of over-the-air and streamed content that consumers expect and now demand.

All these outlets using the same standard will bring competition. Service providers, cable, broadband, and wireless will have to deliver an inexpensive service so folks won’t go elsewhere.