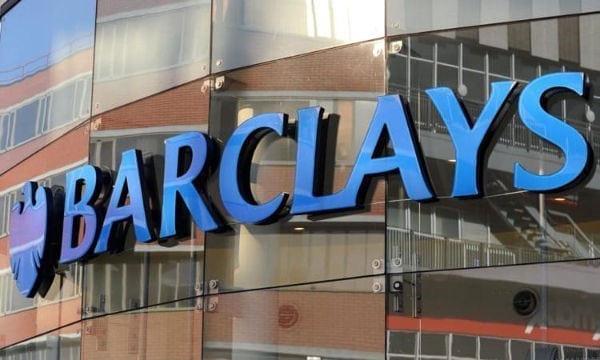 This article by CHRISTINA COMBEN was originally published at CoinCentral.com on August 20, 2018. It is being republished here with the publisher’s permission through syndication.
Blockchain is undeniably the biggest buzzword of 2018. Although, research reveals that just because people have heard of it doesn’t mean they know what it is. The wider public’s definitions in the UK vary from a form of currency to a children’s toy. But with the blockchain race stepping up a gear, Barclays Bank is the next large financial institution to file blockchain patents. Why?

1,240 blockchain patents were filed last year. To give you some kind of perspective, that’s not remotely normal. In fact, it’s 600 percent higher than in 2016. Even companies that were previously bearish on blockchain like Facebook and Amazon are now busy buying up patents.

2018 has indeed been a multi-headed Hydra for the crypto community. The year of the bear, the year of regulation, of cryptocurrency mining malware, and now, blockchain enterprise adoption.

While traditional investors still remain at the gates of the cryptocurrency markets, big businesses are figuring out how to incorporate blockchain tech into their systems. Or, at least, they’re buying up the patents before some fintech upstart does it first.

The 50 largest public companies now exploring blockchain technology include the likes of Oracle, Alibaba, IBM, Ford Motor Company, Walmart, and plenty of financial institutions including Bank of America, and UBS.

The patents vary from launching their own enterprise blockchains to experimenting in food supply chains, controlling traffic flow, and automating the process of creating letters of credit.

It should be noted, however, that while major banks appear to be getting on board, that doesn’t necessarily mean they’re clear on how to develop blockchain for their business. Bank of America, one of the most prolific patenters with 45 blockchain patents seems to be leading the space. Or are they?

CTO Catherine Bessant was quoted in Fortune magazine saying, “While we’ve not found large-scale opportunities, we want to be ahead of it, we want to be prepared.” Right. So, FOMO seems to be fuelling some of this patent frenzy. If that’s the case, is Barclays Bank the next one to succumb?

What Is Barclays Bank Going to Do with Blockchain Tech?

Last month, Barclays Bank filed two blockchain patents that were published by the U.S. Patent and Trademark Office (USPTO). The first is for a Secure Digital Data Operations and the second outlines plans for a Data Validation and Storage system using blockchain technology.

The Secure Digital Data Operations patent discusses the development of a system that will transfer digital currency from sender to receiver in a secure way. By using blockchain technology, the British bank can authenticate the identities of both parties faster and more efficiently. Moreover, they will validate and record transactions using both a digital currency ledger and cryptography.

Interestingly, the Secure Digital Data Operations system will have a myriad of other use cases, beyond currency transfer, mainly keeping customer data secure. Barclays Bank, registered in the UK, must comply with EU data laws such as the GDPR. Blockchain could be the perfect technology to process customer data in a trustless manner while remaining complaint.

There are also illustrations about how customer attestations and claims could be easily verified on the blockchain in cases like insurance and credit status. Obviously, one assumes that the main beneficiary of this system will be the bank itself, cutting down processing costs and manual work. However, its clients will benefit as well–from individuals and enterprises to digital wallets and IoT items.

The Data Validation and Storage patent appears to be a little more straightforward. This is a system that will–guess what?–validate data and store it.

In this patent, Barclays describes the use of the system for its KYC/AML checks. Financial institutions have strong legal obligations when it comes to KYC/AML. But carrying out background checks on customers can be extremely labor-intensive.

Most large banks, government entities, and other companies that need to onboard customers quickly while maintaining high standards of KYC/AML outsource these services to third-parties. With this patent, Barclays looks to propose the development of their own data authentication system.

What About a Barclays Blockchain Lab?

While the UK bank has filed two blockchain patents, this pales in comparison to other banks and FSIs (remember BOA’s 45?). However, that doesn’t mean Barclays Bank is falling behind–far from it, in fact. The British incumbent was one of the first to announce their support for blockchain with two blockchain labs in London since 2015 and multiple experiments with the technology ongoing.

In contrast to US banks, Barclays Bank is much more open to cryptocurrencies and was the first UK bank to open an account for a cryptocurrency exchange.

The historic deal with Coinbase in March of 2018 marked the first official partnership between a UK bank and a crypto exchange. There were also rumors that the bank had plans to set up a dedicated cryptocurrency trading desk, although these were quickly refuted.

Banks are notably in a difficult position, with many taking a separate stance on blockchain technology and cryptocurrency to placate existing customers.

Yet Barclays Bank, rather than just buying up patents in a defensive manner, looks to be actively committed to the space and enables its clients to settle Bitcoin futures contracts on derivatives exchanges like CBOE Global and CME Group.

Developments on Barclays’ patents promise to be interesting if the bank’s crypto-friendly attitude and innovative outlook are anything to go by.

Christina Comben is a B2B writer and MBA, specializing in fintech, cybersecurity, blockchain, and other geeky areas. When she’s not at her computer, you’ll find her surfing, traveling, or relaxing with a glass of wine.
http://www.christinacomben.com/

More on this Topic: MASTERCARD VS. VISA: BLOCKCHAIN PROJECTS