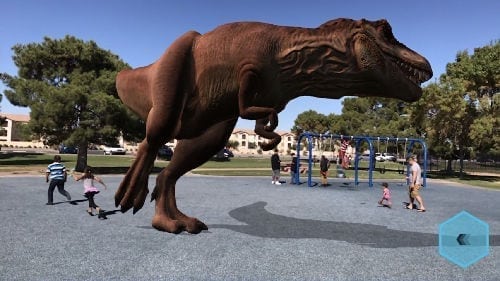 Intriguing Information One Should Know About Augmented Reality

Augmented reality is the latest feature that is being heavily pushed on to consumers by tech companies. Apple and Google are the frontrunners, with Apple releasing their ARKit and Google’s effort being ARCore. Microsoft and even Facebook are close behind in terms of Augmented Reality development, but what is all the hype about? This new wave of technology other than of course, its use in Pokémon Go? Well, here is a complete rundown of everything one needs to know.

Augmented Reality or AR in its shorter form has been around for approximately fifty years, in some form or the other. In 1957, a machine called the Sensorama could blow wind and cause other effects as you watched a 3D movie. Then in 1966 came a head-mounted display that could blend real-world perceptions with data from computers so while we are hearing about it now, the basics of AR has been there long before some of you were born!

Augmented Reality Is The Rage Nowadays

We have all been exposed to AR, although we might not always have known. It is widely used in industrial applications and in the medical sector where surgeons use it during operations. Its usage even extends to the Olympics and vehicles (in the form of heads-up displays). You might find the technology within a simple recording pen or more complex items like video glasses.

AR Has A Vast Effect On Learning

A study conducted by researcher Jeremy Bailenson of the Stanford University has revealed that our brains absorb information up to thirty-three percent more efficiently when in the world of AR. The study further reveals that humans are twenty percent more likely to modify their behavior when left to the “embodied cognition” of augmented reality as they can face the effect of their decisions. This means that AR can not only help students and workers learn faster but they can also help build up brand loyalty.

No matter what your position is, AR can still be easily used. In its basic form, AR blends into your normal routine in a manner that is natural and easy to understand. A study by the Dell and Intel Future Workforce has shown that seventy-seven percent of millennials and forty-seven percent of baby boomers are interested in incorporating AR into their work.

Areas Where AR Is Used

Gaming is an area where the use of AR is rapidly increasing. The infamous Pokemon Go is one such game while a host of other games flood Google’s Play Store and Apple’s App Store regularly. Other than the entertainment sector, AR hardware is used in classrooms nowadays to educate the digital-minded generation. Museums dabble with AR too in order to provide more information about their various exhibits. The most recent partnership was between the iconic British Museum and Samsung and they are currently trialing the technology.

AR’s ability to merge digital information with the real world makes it highly useful in the architectural world. Companies can now use AR to recreate 3-D models of floors and buildings when selling to interested parties and people.

Rachel Stinson has always had a knack for writing, food, fashion, and places. Blogging has combined all four for her with an added bonus of enthusiastic audiences. She expertly analyzes real estates, restaurants and electronics stores with respect to pricing and people involved and can express her opinions in an unhesitant, engaging manner for all matters.

applefacebookgoogleMicrosoft
Previous ArticleThe Cold War Between China and the US on AINext ArticleWhat is SingularityNET (AGI)? | Beginner’s Guide