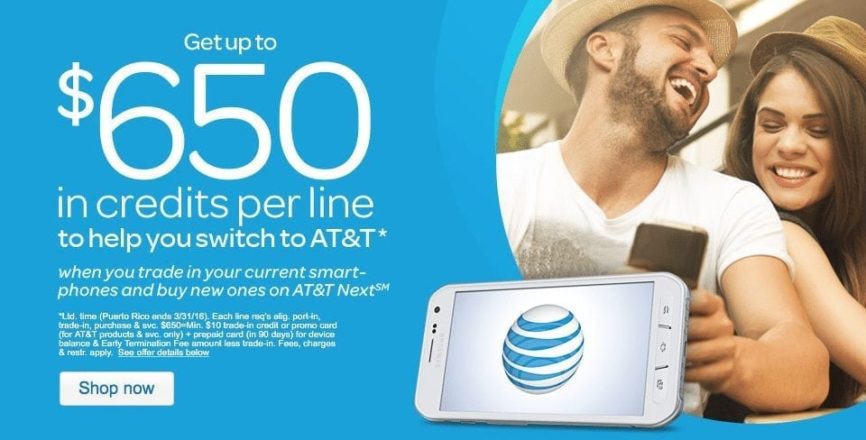 AT&T, one of America’s most popular wireless carrier launched a new promotion on 15th February 2016 that will allow people to get up to $650 in credit per line if they leave their carrier and move to AT&T’s service.

So any potentially new customers will need to also trade their current smartphones and then port their number from Verizon or Sprint or T-Mobile  so that they can avail this promotion. After you have paid the final wireless bill from your old carrier then you can buy a new phone from AT&T. After doing this, you will get a Visa prepaid card with up to $650. The Visa card is the amount which is the early termination fee or balance owed to you on your final bill from which your trade-in value has been subtracted to the tune of $650 per line.

You can also visit AT&T’s website to learn more about this offer.

Any new or existing AT&T customer who use or have added DIRECTV or AT&T U-verse TV can also get the new plan presented by the carrier. This new plan offers unlimited data and talk time as well as texts for only $100 per month per line. Also, any additional devices will be able to use this same service by paying only $40 per month. Interestingly a fourth smartphone can also be added to the devices for free after the bill credits.