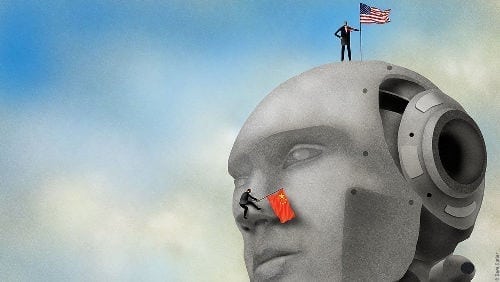 My generation grew up with the nuclear arms race which was a scary prospect that threatened all of humanity. This generation will see a new race in technology that could be equally threatening in a different way, artificial intelligence. Only this time our biggest competitor will be China, not Russia.

It would appear that companies like Google, Facebook, and Apple appear to have an edge over China’s AI development. However, China announced back in July that it intends to be the world’s leader in tech by 2030. China’s huge population provides the diverse data that’s needed for development and training of artificial intelligence systems. AI software finds patterns and makes inferences. To do this it needs very large quantities of data, big data, which China’s population provides.

Like the US, China has its big tech companies. Companies like, Baidu (BIDU), Alibaba Group Holdings (BABA) and Tencent Holdings (TCEHY). These companies are pouring money and resources into Artificial Intelligence research and development. They are also hiring top scientists in the field.  Another advantage China has comes from something it doesn’t have. Privacy protection laws.  With this said, it’s inevitable that China will make significant breakthroughs developing algorithms and the software that replicates a human’s ability to learn, make decisions, and reason.

For now, the US has the edge since most of the chips used for AI processing come from the US. But there is a lot at stake since it is widely considered that AI is a “winner take all” technology.

Although not considered to be a threat in the race for AI dominance, Russian’s Vladimir Putin has stated that whichever country leads in AI will dominate global affairs. He also said,

“Artificial intelligence is the future, not only for Russia, but for all humankind,” “It comes with colossal opportunities, but also threats that are difficult to predict. Whoever becomes the leader in this sphere will become the ruler of the world.”

That is a very scary thought.

US To Invest More In AI

In the US the administration is talking about investing more in AI and finding ways to develop new skills for the workers the technology replaces.

He was speaking to corporate leaders on Thursday at the White House. This was the first summit on artificial intelligence. Representatives from the tech giants; Google, Apple, Amazon, Facebook, and Microsoft as well as other major companies, banks, and engineering schools were in attendance. The race is on.