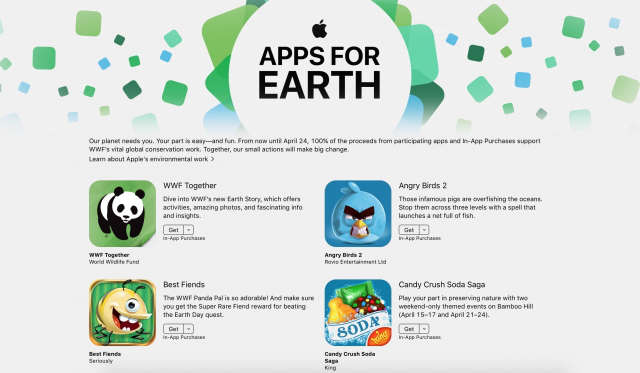 Apple announced on Friday, at the WWDC 2016 that it has raised over $8 million for World Wildlife Fund. The money was raised by purchases made by the App Store on selected applications as part of Apps for Earth.

Apps for Earth began in April 2016. For a total of 10 days, all the proceeds from some select applications went to the World Wildlife Fund. A total of 24 developers participated in the Apps for Earth Campaign. Among the participating applications were VSCO Cam, Angry Birds 2, Line, Hearthstone, and Procreate. These apps were very heavily promoted. During the time of the fundraiser, the icons of the applications were also changed. The theme of the App Store’s front page was also changed and it showed different environmentally conscious messages.

According to Carter Roberts who is the CEO of WWF;

“Apps for Earth proved small actions really can equal big change. This campaign boosts our efforts to protect the world’s forests, oceans, freshwater and wildlife, and combat the dual threats of climate change and unsustainable food production. Our work rests on engaging hundreds of millions around the world – to understand our profound reliance on the Earth and to act to protect the natural world that supports all of us.

I was blown away by the devotion that Apple and the 24  developers brought to this campaign. Their creativity and heroic effort brought our mission and our work into people’s lives at an enormous scale. It is our hope that Apps for Earth has left a permanent mark on everyone who participated and inspires a new wave of conservationists.”

This campaign was the second time that Apple raised funds in collaboration with WWF. In 2015 a multi-year partnership was also announced by the two in order to protect responsibly managed forest area in China amounting to a million acres.