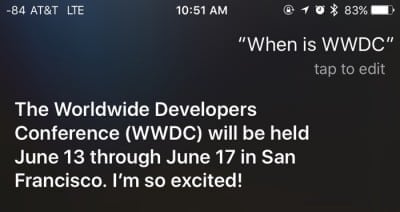 With all the rumors and news of upcoming plans being implemented, people are definitely eager to hear from Apple about its next conference. Moreover, it is expected that some of the upcoming Apple gadgets will be released after the next World Wide Developer’s Conference (WWDC 2016), which is just around the corner. The wait is now a huge step closer to over.

Currently scheduled from the 13th to the 17th of June, the conference will, once again, be held in San Francisco with the Keynote and other first day events held at the Bill Graham Civic Auditorium as it was for the Hey Siri event last year.  The rest of the events will be held at the Moscone Center at it has in the past. The dates are official, that being supported by the fact that even Siri mentions the dates in her answer to when the WWDC will be held:

“The Worldwide Developers Conference will be held June 13 through June 17 in San Francisco. I can’t wait!”

Aside from the recent publication, the conference dates were known early through the conference area’s schedules. Moscone West, the convention center where the conference is to be held had already been occupied throughout June besides the third week.

WWDC is where Apple will unveil its new iOS and OSX software. We might even get to see new products and services as this venue has been used in the past to introduce Apple’s products and services. The popularity of the event, however, comes from other developers being able to interact and learn from Apple’s team and other IT professionals. And as such it tends to be larger than before each time. It won’t be long before the tickets are given out to developers, the tickets being set for $1,599. To take part one must have already been a member of Apple’s Developer Program. Similarly, for the youthful developers under the age 18, a caretaker must purchase the ticket and should also be a member of the program as the elder developers are. However, for ambitious developing prodigies and the talented youth, scholarships, and financial support will be sent out to them as a gift.

To display the exciting progress of the event, the volunteering developers would be provided with these tickets through a lottery. A random selection out of a mass of registered volunteers will take place. The lucky winners will all be given the message once the draw ends, and will receive their tickets for the WWDC 2016.