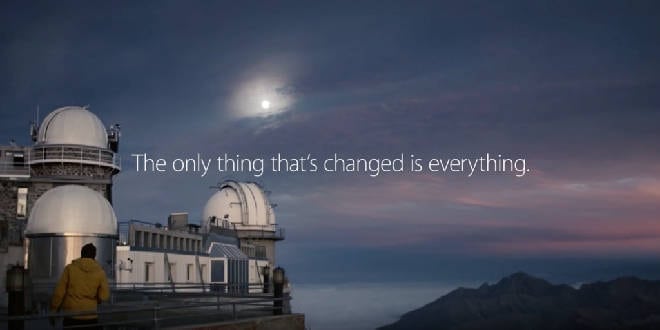 Apple has released two more iPhone ads for the iPhone 6s through it’s official YouTube channel. The advertisement showcases the Hey Siri function of the phone along with how quickly the phone operates. Jon Favreau and Penelope Cruz are both featured in the advertisement and they use the iPhone 6s to see and enjoy a home movie and look up things on the internet.

The advertisement is titled Ridiculously Powerful and it focuses on the A9 processor of the iPhone 6s. The iPhone is used for the Apple Pay, to play games and to take pictures and record videos. The narrator says that in the new iPhone 6s “Not much has changed, except it’s ridiculously powerful, which makes everything faster,” Jon Favreau appears in this advertisement. The advertisement is a minute long and shows a number of 3 party apps being played on the iPhone 6s including  Garageband and iMovie. It also shows professional gamers competing against each other in the ESport tournament using the iPhone 6 s.

In the second video, titled Hey Siri, the focus shifts to the Hey Siri feature of the new smartphone which is always on. The advert shows that even though with the previous versions the iPhone’s Hey Siri feature was only available when it was plugged in but in the new model the hands-free  Siri voice activation is available 24/7. Penelope Cruz appears in this ad as a person who is, well not so good at crosswords.

Both these adverts are taking Apple in a new direction through a  marketing campaign titled “The only thing that’s changed is everything” which is being used to describe the new iPhone 6s. This concept was first introduced by the Chief Executing Officer of Apple, Tim Cook when he introduced the iPhone 6s and iPhone 6s Plus to the world on the September Hey Siri event. The event also showcased the revamped internal components of both the phones and consequently several advertisements were released which focused on the camera, Siri and 3D touch features included in the new models.

As the Christmas season fast approaches Apple will most likely release more advertisements featuring big stars. Apple’s 2014 holiday season advertisement was one that went for the feels so perhaps this year will follow in the same footsteps.