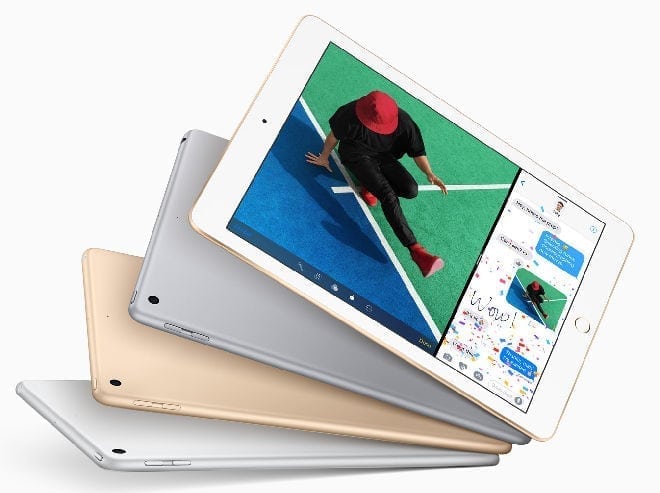 Apple’s path with the iPad has been a little rough over the past couple of years. The iPad Air failed to excite Apple fans with its beautiful, extremely thin design. The iPad Pro did a little better with iPad fans and has attempted to compete against the Microsoft Surface line to be crowned as the replacement for the laptop. This doesn’t make complete sense as Apple is the producer of one the most popular laptops in the world, the MacBook.

On Tuesday, Apple decided to silently release a new color option for the iPhone 7 and 7 Plus: Red. Apple also released information about the next generation new iPad called simply “iPad”. The new iPad replaces the iPad Air 2 and seems to end the iPad Air name altogether. The iPad is the standard 9.7 inches, weighs only one pound, and is only 7.5mm thick. It comes with few but very important updates that compare heavily to its predecessor, the iPad Air 2.

The iPad’s new Retina Display comes with a 2048×1536 ppi resolution which can run for up to 10 hours on a single charge. It sports the new 64-bit A9 chip, the same one that is in the iPhone 6s and 6s Plus. It, of course, sports the latest version of iOS 10 and comes with a Touch ID fingerprint sensor embedded into the Home button. The iPad comes with an 8MP rear camera and a 1.2MP front-facing camera. The rear shooter can record 1080p HD video.

The iPad will be available on Friday, March 24, 2017, at 8:01 AM for pre-order. It comes in the standard gold, silver, and space gray color options. Storage configurations include a 32GB model for $329 USD and a 128GB model for $429 USD, making it the cheapest iPad offered by Apple. It is even cheaper than the cheapest configuration of the iPad Mini 4. Wifi+Cellular models are also available.