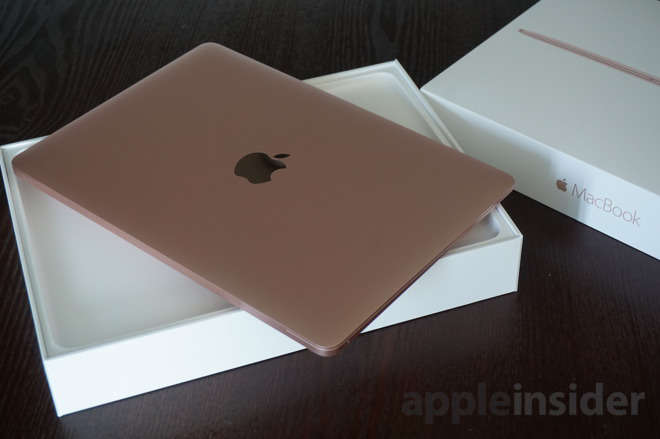 Apple recently released a 12 inch rose gold MacBook that offers many of the same features as its previous model. The introduction of a brand new color, rose gold, brings it to the same league as the iPad, iPhone, and the Apple Watch.

The new MacBook features all of the colors from the 2015 model (namely gold, silver and space gray), with the addition of the new rose gold. Additionally, it has a single USB-C port on the left side for syncing and charging, and 3.5-millimeter headphone jack and two small microphone inputs located on the right side are some of the design features that are carried forward from the 2015 model.  Some of the more prominent features of the 2015 model, such as the ultra-thin keyboard, 12-inch Retina Display, and the Force Touch Trackpad have been retained for this year’s model. Also, the low-resolution 480p FaceTime camera will also be keeping its position at the front of the device. The reason for sticking with the low-quality camera may be attributed to the thin design of the device. In accordance with the other members of Apple’s lineup of rose gold products, the new MacBook may look a bit downcast in soft lighting, but presents the signature pink hue of Apple products in brighter environments.

Apart from the exterior color addition, there are major changes on the inside of the 2016 MacBook. With the introduction of Intel’s latest ultra-low-power Skylake processors and a faster flash memory, the new MacBook hopes to become a contender in the performance race. Apple has also increased the clock speed on the 8 GB of Ram available on the device whilst claiming the device’s battery life lasts up to an hour more than its previous model.

With Apple failing to make any ground-breaking changes in the new version of the MacBook and also keeping the initial price point the same ($1,299), the consumers are skeptical as to whether the new MacBook will be able to deliver what it is promising. With preliminary tests showing performance improvements of about 15-20% due to the new processor, it is still being considered insufficient to persuade consumers with high-performance demands.

But of course, the MacBook is not developed with the high-performance user in mind, despite this, there is a market segment that admires the sleek design of the 12-inch MacBook. Safe to say, such admirers will be pleased with the elegant and lithe design of the chassis.