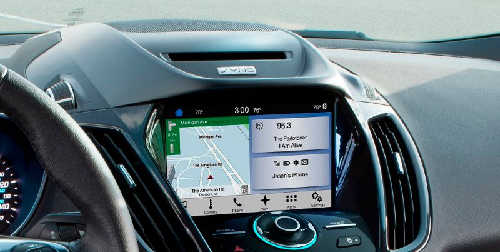 Ford will now, finally, adopt  Apple’s CarPlay and Android Auto for the infotainment system in its cars. The announcement was made at the CES event in Las Vegas this week.

The Ford’s Sync 3 connectivity system will allow all iPhone users to access Siri as well as Apple Maps, among other things. Siri Eyes will also be a new free application available to users and it will be separate from the Apple CarPlay. This will allow people to navigate with voice commands. In car phone connectivity will also bring to Apple CarPlay and Android Auto users the ability to make phone calls and stream music. There will also be WiFi connectivity which will allow the car itself to automatically update its settings when connected to the home network. When the car is connected to Apple CarPlay or Android Auto the dashboard screen of the car will be used as the screen of a mobile device.

According to Don Butler, executive director, Connected Vehicle and Services for Ford, “Sync allows customers to bring the smartphone technology they’re comfortable with into a vehicle and use it without hassle,”.

The Ford company announced in March of 2014, almost two years ago, that they were interested in working with Apple. This will increase the appeal of Ford cars to consumers as well. The infotainment system will be a standard feature of 2017 models of Ford cars as well. This will begin with the newest 2017 model of Ford Escape which will be on sale in spring 2016.

Additionally, Ford has also added a number of new applications to its AppLink platform. These include AAA member services as well as Concur expense tracking and Eventseeker, which is a location based service. It will also include a new feature, powered by 4G technology, called “Sync Connect”. This feature will allow users to remote start the car and do other things like unlock doors, check fuel levels and locate via their GPS.

Ford’s Sync infotainment system is on an estimated 15 million vehicles that are currently on the road. This number is expected to rise to 43 million by 2020, according to the automobile manufacturer.