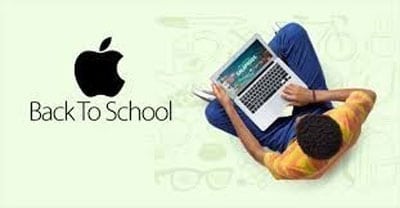 Apple’s back to school 2015 promotion

On Thursday, July 23, Apple’s back to school 2015 promotion was released. This year Apple is offering their potential customers a bundle deal with several of their amazing Mac computers. This list of Mac computers being offered includes iMac, MacBook, MacBook Pro, MacBook Air and Mac Pro with build-to-order configurations. Customers must purchase any of the above models with education pricing and they will be given a free pair of Beats Solo2 On-Ear headphones.  However, Mac mini is not included in this deal.

While disclosing this year’s promotion, Apple said that an instant credit of $199.95 will be applied at checkout for the headphones, which are available in a variety of colors. These include gloss black, white, blue, red, gray and pink. Buyers are also given an option of upgrading from Beats Solo2 on-ear headphones to more expensive and of course, better, Beats Solo2 Wireless On-Ear headphones by paying an extra $100 difference in price. (Totally worth it!) Full eligibility criteria, terms and conditions for this promotion has been announced by Apple.

This ‘Back to School’ promotion is quite an aberration from previous years when Apple used to include ‘gift cards’ along with purchases of products like Macs and iPads. Last year’s customers who bought a Mac were awarded a $100 gift card by Apple. Similarly, a purchase of an iPhone or iPad got them a free $50 gift card.  This year Apple decided not to include iPads in their promotion despite their earlier efforts of pushing the high-end tablet into education markets.

This year’s launch of the ‘Back to School’ promotion was released later than expected as traditionally Apple launches this promotion during the month of June or early June. Usually, the second Tuesday of July was reserved as the release date for the back to school promotion for several years in a row.

Apple’s ‘Back to School’ promotion will run from July 24, 2015 to September 18, 2015, at Apple Retail Stores, It is available on the Apple Online Store from August 6, 2015, and September 18, 2015, in the United States, Puerto Rico and Canada. As of yet Apple has made no official announcement regarding the promotion’s release in other countries.