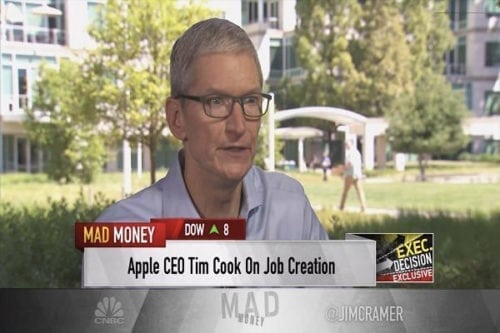 In an interview with CNBC’s Jim Cramer Apple CEO, Tim Cook announced a 1 billion dollar fund for advanced manufacturing job creation in the US.  Mr. Cook said they have already talked to the company they are going to invest in. They will be making an official announcement later this month.  So, we will have to wait and see who the lucky company is and find out more about what it is they manufacture. Also how it fits into Apple’s manufacturing plans.

I would think this is music to President Trump’s ears since US manufacturing job creation has been stated as being a major goal of this administration.

Tim Cook speaks of the over 2 million jobs Apple has created in the US already. This includes not only the thousands of employees on Apple campuses but the thousands of Apple Store employees throughout the US. Add to that the over 1.5 million app developers and jobs created from Apple suppliers.

The additional jobs that are expected to be created from the 1 billion dollar fund Apple has setup, will have a ripple effect the CEO goes on to say.

Tim Cook says that investing in advanced manufacturing jobs in the US is one way of giving back. Apple runs entirely on renewable energy and it is the most environmentally responsible company on the planet. These are other ways the company gives back.

We are anxiously awaiting news on who this company is that Apple has invested in. Where this company is located and exactly what they will be manufacturing is also questions that are begging for answers.  We will let you know as soon as we find out. Stay tuned. Check out the interview.