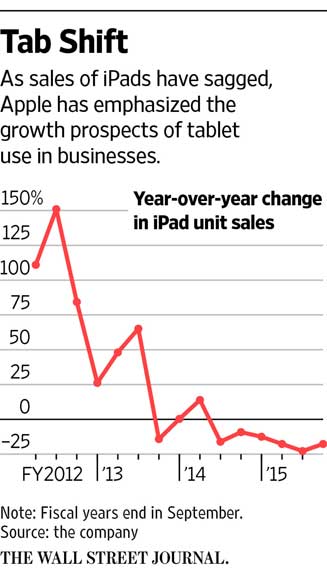 Declining sales of the once blockbuster iPad has made the tech giant worried and has Apple working towards an iPad comeback.

It is reported that the Cupertino-based company has been working with more than 40 other tech companies to make a comeback in the slumping sales and to make the device a more valuable tool in the workplace. Apple’s partners in this program include smaller names like accounting firm Xero, Revel Systems – which deals with digital cash register, field service software firm ServiceMax etc.

Apple is inviting officials from accounting firm Xero Ltd.and other partners in the business app program to train Apple business specialists. Apple also invited some of its allies to present at an Apple sales conference in March in Huntington Beach, Cali. The event is typically closed to outsiders, told people familiar with the program. It is quite an aberration for a company like Apple, which traditionally has paved its own path in the consumer market, with little or no help from others.

The initiative is a bet that Apple, which has never been a big player in the $2 trillion annual spending on workplace technology, can grab a bigger slice of the market by reshaping the nature of work in mobile-friendly settings—where Apple has an edge

In the program,Apple is trying hard for an iPad comeback as they and other partners work together in such a way that Apple reviews its partners apps and makes suggestions on their work.

It has also been suggested by Apple that the companies who make complementary apps work together to make their apps compatible, which in result will ensure a better experience for the users.

This business app alliance or “program” was first disclosed by Apple in April but has provided only a few details regarding it since then. Here steps in Apple’s penchant for secrecy as details of the program are not only unclear to the outsiders but even to the participants. Officials at some partners say that they are not sure of their role in selling apps and are unaware of the identities of all the other partners.

The initiative has been referred to as the “mobility partner program” or MPP, but it is reported that Apple has discouraged partners from using that name publicly.