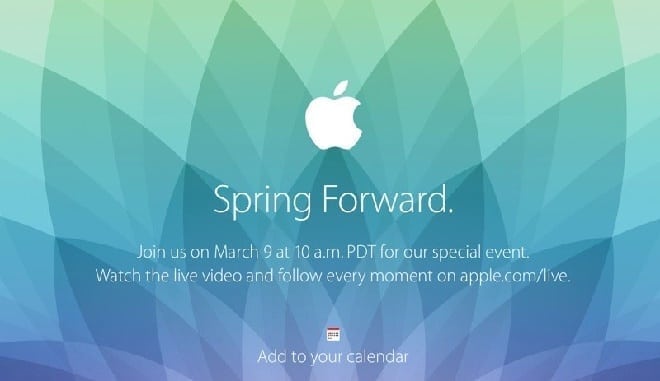 As opposed to the usual Apple events where the company announces a multiple products or services, the next such event will be focused on only one thing: the Apple Watch. The event will kick off on 9th March at 10 am Pacific Time (or 8 pm UTC). Check out how to catch the event live after the jump.

Ever since the launch of Google’s Android Wear last year, fans have been looking towards Apple eagerly for a wearable of their own. The Apple Watch was announced last year in September with the launch of the iPhone 6, but no details were given out. So this is one event hardcore Apple fans wouldn’t want to miss out.

This event is significant, in the sense that it will mark the launch of a new Apple product, and not just a new model. This will be the first product Apple has launched under CEO Tim Cook (and after the late Steve Jobs).

Apple has promised that it will provide the Apple Watch event livestream on its website, apple.com/live. Typically Apple livestreams are only available through Safari on iOS and Macs, or through Apple TV.But there are always workarounds, so check back soon if you’re using Windows – we’ll be sharing workarounds as we discover them.

If you don’t have the time to sit through the entire livestream, Apple invites you to “follow every moment” on its live event webpage. Besides the livestream, Apple will also be providing quotes, photos, and videos from the event in real time so you can follow the event at your own pace.

Besides the Watch, a completely new MacBook Air design is also rumored to be announced, although the event will largely only focus on the Apple Watch. That’s just a rumor though. What we do know is, the Apple Watch will be available by April, with the March 9th event highlighting its specifications. It will be interesting to see how it stacks up against its heavyweight Android competitors, namely the LG G Watch R and the Moto 360. We predict the price to be around the $350 mark, however the gold Apple Watch cost is expected to be well over $5,000!

What are your thoughts on the Apple Watch?