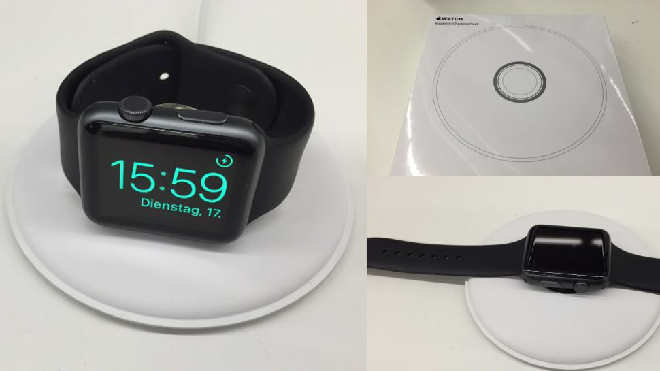 So as you may have noticed, Apple loves to cash in on official accessories for it’s devices. It is, therefore, surprising that the tech company hasn’t yet bothered to release a charging dock for its Apple Watch. This may soon change however as new pictures have surfaced of a supposed Apple branded Apple Watch charging dock for the Apple Watch. 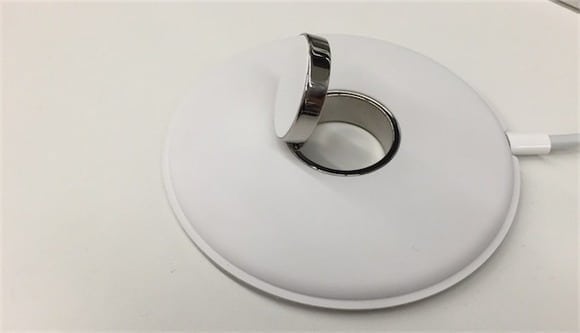 If the report of independent German tech blog grobgebloggt.de is to be believed the new charger will be white and circular, like a CD.The pictures show both the packaging and the dock itself. The whole design seems very simplistic and minimal. The dock supposedly uses a built-in magnetic ring or puck to charge the Apple Device without having to plug the device to a charger. The device’s charger will be called simply ‘Magnetic Charging Dock’. The magnetic puck within the dock can be adjusted to suit the way the Apple Watch is laid down. The Apple Watch can be either laid flat on the dock in ‘Portrait mode’, which is a watchOS 2 feature, or on its side as in ‘Landscape mode’. You will now finally be able to use your Apple Watch as an alarm clock. It is not yet clear that what material the dock would be made of however silicone seems to be the most likely choice as it is stated that the dock feels ‘quite heavy’.

The Dock will also include a 2 meter long Lightning cable through which electricity will be provided to the dock. It will however not include a USB power adapter.

The pricing on the packaging is in Euros. The dock will be priced at 89 Euros which translates in to 79 dollars.This is definitely very expensive especially when compared to alternatives offered by Amazon or Best Buy. If you like the upright position you should instead invest in Bluelounge Kosta’s charging coaster for only 15 dollars. The supposed dock offered by Apple seems to be much more high tech than any of  it’s current alternatives.

These reports are however basically just ‘rumors’ as of now so the reader is advised to take them with a pinch of salt.