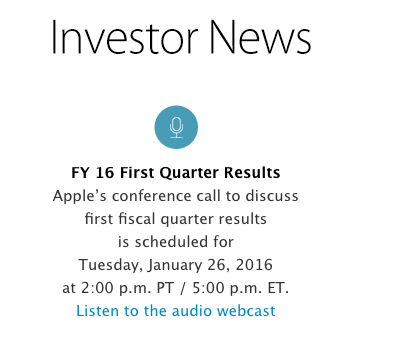 Apple will be releasing the Q1 earnings results for the first fiscal quarter of 2016, which can also be called the fourth calendar quarter of 2015, on Tuesday, January 26th, 2016. This news was confirmed by Apple via the Investors Relations portal on January 4, 2016. The conference will begin at  2:00 p.m. Pacific Standard Time or 5:00 p.m Eastern Standard Time. The earnings of Apple for Q1 2016 will be released at 1:30 pm Pacific Standard Time or 4:30 p.m Eastern Standard Time, which is when the stock exchange closes. The call will be broadcast live on Apple’s official website and it will also feature questions from the press and investors to the executives of Apple.

The company has been known to almost regularly break records for the 3 month period and crush the sales rates of smartphones while it’s at it. Last year it broke its own record by selling 75 million iPhones and creating revenue worth $75 billion.

However according to some analysts, Apple’s winning streak might not continue this time as they are convinced that the company will show flat or declining sales of it’s iPhone. This will be the case despite, comments according to investors, and despite the grand unveiling of iPhone 6s recently in September 2015.

We will also be able to see if the release of the new iPad models, iPad Pro and iPad mini 4, has had any affect on the sales figures. Apple also introduced big discounts on it’s iPads before the holidays and perhaps these discounts were able to revive the tablet line of Apple. Apple reportedly sold almost 21.4 million iPads during last year’s Q1 and this was a decrease of 5 million units from 2014’s figures for Q1. Apple also reported revenue of $51.5 billion and a net quarterly profit amounting to $11.1 billion. Almost 48 million iPhones were sold during this quarter along with 9,9 million iPads and 5.7 million Macs.

Shares of Apple Inc closed on the high side on Monday, which was the first trading day of the new year. The share price showed an increase of $0.09 or 0.09% which was heavier than the average volume of 67.3 million which defied the broader market selloff resulting from fears of slow growth rates originating from China.