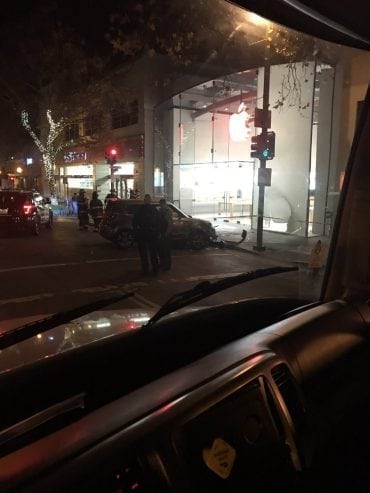 An Apple Store burglary was perpetrated recently. The store is located on University Avenue in Palo Alto, California. Due to it’s proximity to Apple’s headquarters the store is frequently visited by apple executives. Tim Cook also visited the store to mark the launch of iPhone 7.

The Apple Store Burglary took place around 4 am. 8 to 10 burglars are thought to be involved in the crime. The suspects drove a 2016 Kia Soul through the front of the store along the sidewalk. This made a hole in the bottom of the glass panel through which the suspects entered the store. Officers who responded to the scene found the vehicle abandoned on the sidewalk.

A second vehicle was also found at 445 Bryant Street which is just across University Avenue. Officers recovered a number of Apple products from the ground near the second vehicle. Footage of the crime shows that the suspects wore hooded sweatshirts making it difficult to ascertain their characteristics.

Police Are On The Case

However, it seems that progress has been made in the case as arrests have been made by the police. Erica Jaynisha White and Shaquin K. Ferguson were arrested by the Palo Alto Police on Sunday. Ferguson is a prior offender who is currently on parole for weapons violations. The charges leveled against them are those of burglary, vandalism, and conspiracy. Two males aged 16 and 17 were also arrested on similar grounds. Furguson and White have been booked into Santa Clara County Main Jail. The youths were transported to Santa Clara County Juvenile Hall.

Police Sargent James Reifschneider called the crime a “pretty brazen act”. There has been a wave of burglaries targeted towards Apple Stores in the Bay Area.  Those thefts, however, have a different modus operandi as culprits would rush into the Apple store and grab devices before making off with them.

The Apple Store is expected to reopen for business from Monday onwards.