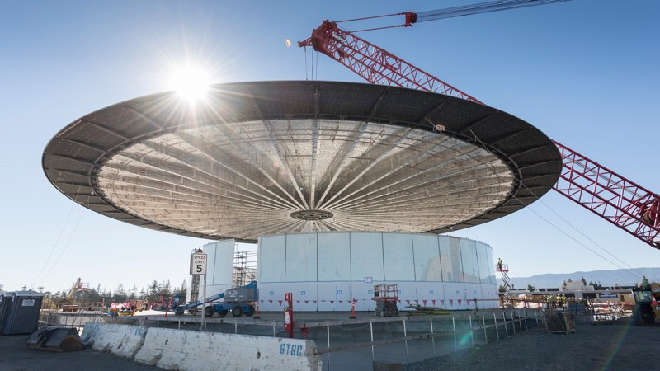 The construction on Apple’s new campus is ongoing and in full force. So far we have been able to view it through drone videos and construction details but now Mashable has been given a sneak peek into the impressive new building project. Apple has shared details on the spectacular ring-shaped structure and the surrounding buildings. The massive curved glass windows that are present in the building will allow light to flood into the interior while giving it an open feel. To create this visage 3000 curved glass panels were required, one of which is 46 feet long and 10.5 feet wide. Getting these panels into place was a tricky proposition and required the use of custom built machines which have been dubbed “Manipulators”.

The “Theatre”, is a 120,000 square-foot underground auditorium in which it is said that Apple will host many of its future events. This space is meant to accommodate up to 1000 people and offers panoramic views of the whole facility ranging to 360 degrees. Apple has drawn light on the roof which is the most impressive part of the building. The roof had to be assembled in Dubai after which it was shipped in pieces to the United States.

“But perhaps the most stunning addition is its roof, which Apple believes is the largest free-standing carbon-fiber roof ever made. Created by Dubai-based Premier Composite Technologies, it’s a massive statement piece, in addition to an impressive design feat. But please, Apple doesn’t want you to call it a UFO. The roof was added to the Theatre last month. The circular roof is made up of 44 identical radial panels averaging 70 feet long and 11 feet wide, and each connects to a small central hub positioned in the middle.”

The new campus is also set to house a sixty thousand square foot restaurant space. It will accommodate two-thousand eight-hundred employees inside and twelve-hundred more on the patio. The restaurant will also showcase two glass doors which will be 4 stories high. The project is expected to be finished at the end of 2016.