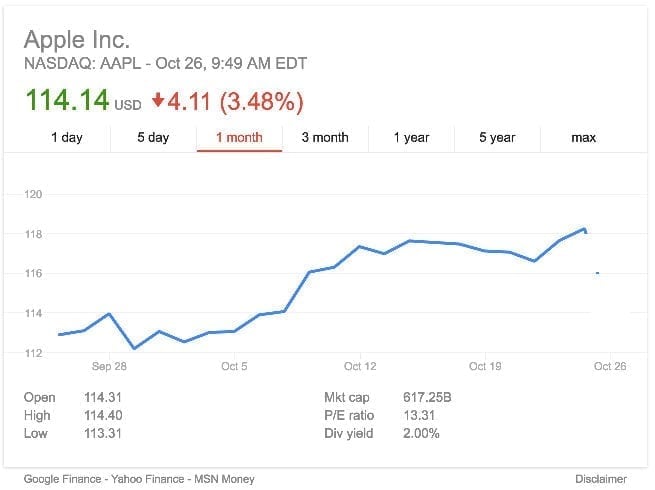 It was heard that Apple is losing its market as Samsung and other smartphone brands are getting a strong footing in the industry. The stocks, however, tell a different story. The stock has risen up almost 20% in the last three months alone and reached an all-time high of $119.

Analysts still believe that the stock has not yet reached its maximum value and is expected to rise even further. Analyst Kulbinder Garcha believes Apple shares could rise almost 40%, to a price of $140, thanks in part to taking away market share in the smartphone business (iPhone), tablet business (iPad) and computer business (Mac), as well as the greater adoption of the iOS ecosystem.

The largest competitor in the industry that came close to threatening Apple’s stronghold in the smartphone business is Samsung and due to the number of exploding Note 7 incidences, from which they are yet to recover and are still in the process of recalling all the Note 7 phones that have already been dispatched.

The stocks also went up after the unveiling of iPhone 7 and iPhone 7 plus, which provide longer battery life, more storage and brighter screens than their predecessors, but eliminate the traditional headphone jack.

All these reports and facts only reinforce the fact that Apple shares are on the rise and they are yet to reach their peak.