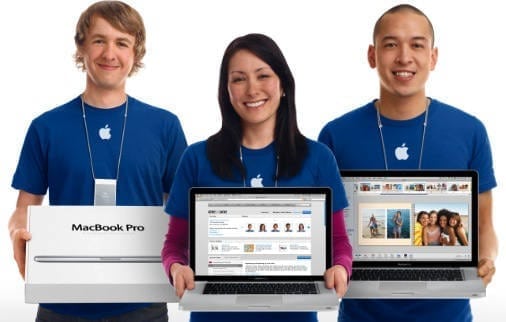 It is unusual for an employee to share their experience of working at Apple because at the first day of work employees sign a confidential agreement. This agreement prevents the employee from speaking about his job publicly. The employee can’t announce his job on social media neither can he take a selfie wearing Apple T-shirt.

The employee did not disclose his name because of the fear of Apple taking legal action against him. He said that Apple pays employees £8 per hour in the UK and employees do not receive a bonus for their sales. Most of the employees cannot afford the Apple products. He further added that Apple does not internally promote employees in UK.

“We had between five and eight store managers during my time at the store, of varying kinds,” said the employee. “Only one of them had started at Apple, the rest had been recruited from elsewhere – from, say, Dixons or HMV.”

They did try to fix that with a ‘Lead and Learn’ program, where you train on the shop floor by acting as a manager without being a manager. We had some great people on the shop floor, people who had been there for five years, who were selling more than anyone else. But they were still just specialists or experts [two of the lowest ranked positions at Apple].

As far as I’m aware — and I’m still in contact with these people — no-one on this program has been promoted to manager. There are other jobs in-store that can earn you more money, but they’re technical jobs, like working at the Genius Bar, which a lot of people absolutely hated because you’re dealing with really angry customers.

The employee also added that they usually face death threats from unsatisfied customers. Furthermore, employees do not get any incentive if they sell enterprise contract worth hundreds of thousands of pounds to business customers.

There are however a few advantages working at Apple like getting a discount on Apple items, 15% discount on AAPL shares and getting to talk to CEO Tim Cook.