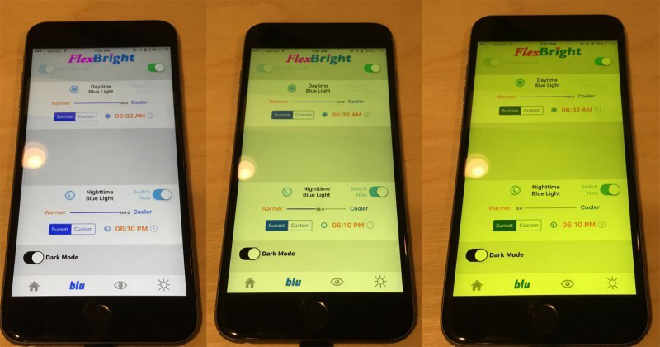 Earlier this week we told our readers about FlexBright, which is a blue light reduction app which works similarly to Apple’s night mode. Apple had initially approved the application for the App Store but has now pulled it from the selection. Sam Al-Jamal, who was the developer behind FlexBright has told MacRumors that it had been a long and difficult struggle to get Apple to approve FlexBright affirming that they were no private API’s present to which Apple had agreed and approved the app. However, now after citing further review as the reason Apple has disallowed FlexBright. “The bottomline is [Apple] won’t allow apps to change screen colors,” Al-Jamal said.

Al-Jamal said that Apple did not approve of custom classes based on non-public API’s. “I recreated three classes based on non-public APIs. Even though these are custom classes that I created, but essentially they’re using the same methods as in their non-public APIs.”, he noted. Also the app was using silent audio and kept running in the background which has been known to drain the device’s battery. This was previously seen in the Facebook app which was damaging battery life due to silent audio. The silent audio was justified using a music player and was previously approved by Apple. “We labeled it as a new feature to “rest/close your eyes for few minutes and listen to some music”. Apple commented that this had nothing to do with the purpose of the app and they will not allow this approach. Lastly, Apple had instructed him to remove the blue light filter from the app but he refused to do this and has instead focused his efforts on new projects.

Undoubtedly some questionable tactics were being used by Al-Jamal in trying to get his application green-lighted for the store but the fact that FlexBright had initially been approved shows that there are inconsistencies in Apple’s selection process. There have been numerous complaints regarding the way Apple selects new apps. Developers have been facing issues getting their apps approved and the lack of streamlining in the process is something that will harm the overall quality of the selection in the App Store.